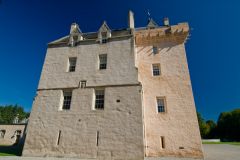 If you enjoy exploring castles, as I do, then you'll be interested in an organisation that I just discovered. Its called the Scottish Castles Association, and it brings together castle owners and enthusiasts; people who care about the incredible range of historic castles in Scotland. The SCA was founded in 1996 with the help of novelist Nigel Tranter, whose books did so much to popularize Scottish history and heritage.

The avowed aims of the SCA are 'to encourage the protection, conservation, restoration, research, study and appreciation of Scottish castles and historic buildings and bring together all those with an interest in them.' The SCA arranges weekend castle tours, day picnics, and conferences. Visits are often to castles which are not normally open to the public. As this is written, the SCA has organised 2011 member tours to visit castles in the Borders, on the Isle of Man, and Caithness and Sutherland.

The SCA also gives out an annual Nigel Tranter Award for 'an individual or organisation whose contribution to the conservation, restoration or advancement of Scotland's castles has been, in the opinion of the judges, most (and sufficiently) meritorious during the previous year. '.

The SCA website has a detailed list of 'associated' castles, including many that are not often open to the public. A few random castles included in the online information are  Glenbarr Abbey in Kintyre, the family seat of the MacAlisters of Glenbarr for 220 years, and Pitcullo Castle in Fife, a late 16th-century L-plan tower house.

Among the interesting projects, the SCA is undertaking is an ongoing project to collect and collate mason's marks left on castles. They also maintain a list of people with skills useful to maintaining and preserving castles, and the website has a short visual guide to castle terms (now I know that a 'bartizan' is a corbelled turret!).

Membership includes special visits and other group events, a full-colour printed journal, and access to a Members Only information area on the SCA website, including a special castle photo library.

If you want to keep up with what's happening with Scottish castles, even if you are not a member, you can sign up for a free newsletter detailing news and events.

Resources:
The Scottish Castles Association
Our Gazetteer of Castles in Scotland