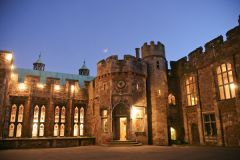 How would you like to have to do two miles of pipework, install five new boilers, lay 100 metres of new gas mains, and set up 300 metres of steel supports. Oh, and then when you've got that done, fit 8 miles of insulated cabling, 3.5 miles of data cabling, install 400 wall sockets and 200 light switches, not to mention refurbish 100 light fittings? And all this during one of the coldest winters in living memory. No, me neither. But that's what's been happening at historic Berkeley Castle, Gloucestershire.

The castle has been closed to the public since November 2010 while essential repairs to the plumbing and wiring were carried out. That work is now complete, and the castle will re-open to the public on Sunday, 3 April. That's Mothering Sunday, and there will be a special gift for every Mum (while supplies last, so get there early!)

Background
During the 1920s, the 8th Earl of Berkeley and his second wife wanted to make the Castle their main residence. This called for extensive renovations to update the Castle and its amenities. The Countess was American and encouraged the Earl to create en-suites for all of the bedrooms, now on the private side of the castle.

This meant that the contractors had to plumb in over thirteen bathrooms. Eight of these baths required re-enamelling and several 1920’s heated towel rails had to be connected to the heating system.

The Earl’s renovations also included a marble bathroom purchased from the Waldorf Astoria hotel in New York. This bathroom he installed into one of the private en-suites. Having to lift the marble to access the pipework caused more than a few challenges for the plumbing contractors!

We visited Berkeley Castle a few years back and really enjoyed ourselves. Its a wonderful, atmospheric place, with a marvellous ambience. We especially enjoyed the gardens, but if you are the sort that likes a bit of grim and gruesome history, you'll head straight for the chamber where Edward II was cruelly murdered. Whatever your fancy, don't forget to visit the beautiful old medieval church beside the castle grounds.

Originally home to the Arnott family Kirkconnel Hall dates as far back as the 15th century, providing the property with great historic interest. It is only 10 miles north of Gretna in SW Scotland. more >>