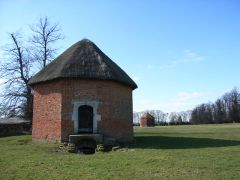 In 1662 William Dormer, who revelled in the nickname The Splendid, built an elegant stately home near the Oxfordshire village of Stadhampton. Dormer was a flamboyant character, a man who liked to make a splash. He had his horses shod with silver horseshoes, and used silver rims on his carriage wheels. So when he built a house, he did it in some style. But he never got a chance to enjoy his creation, for the house burned to the ground before the Dormer family could move in.

The exact site of the mansion has remained a mystery to historians ever since. In 2009 an excavation on the presumed site revealed only that the Dormers made another attempt to build a house at Stadhampton around 1720. That house was never finished, probably because the Dormer's ran out of money, and the mystery of the original mansion location remains. The grounds were landscaped, however, and the gardens laid out.

The Ascott Park estate was later used for housing World War I veterans, and for small farms. But now, thanks to a project by Oxfordshire County Council and the Oxfordshire a 2-mile walking path around the estate, called the Ascott Park Historical Trail, has been created, offering visitors a chance to view the excavations, and see a dovecot and a historic outbuilding that may have been a garden pavilion.

There are interpretation panels to explain the site and the excavations and tell the story of the Dormer family. Perhaps the best place to start the walk is from Newells Close, off the A329, where you can park at the Crazy Bear farm shop (gates close at 6 pm).

Background
The Dormer family made their fortune in the wool trade. Sir Michael Dormer, later to become Lord Mayor of London, purchased Ascott Park in 1518. Later family members erected a fabulous gateway as a grand entrance to the estate. When the County Council purchased Ascott Park in the 1920s the gateway was pulled down and given to the Victoria and Albert Museum in London.

It was on display for many years before it was moved into storage. Now, the Bodleian Library in Oxford is trying to raise money to have the gateway returned to Oxfordshire to become the grand entrance to the New Bodleian in Broad Street, Oxford.

NB. Don't confuse the William Dormer who built Ascott Park with the Tudor nobleman of the same name who was once engaged to Lady Jane Seymour. An earlier Dormer built Rousham House, at Steeple Aston.

Resources:
Oxford Times new story about the trail
Oxfordshire County Council - download trail information and maps
Stadhampton is located 3 miles south-east of Oxford, off the A329 and the B480

Photo of Ascott Park icehouse is © Andrew Smith, licensed for reuse under the Creative Commons Licence.

Bickleigh Castle is one of the most romantic settings for holding your dream wedding, at any time of year with all of the magic and splendor that you are looking for at a price you … more >>