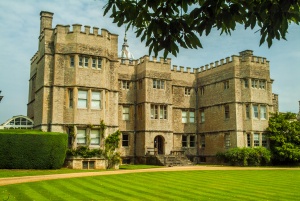 Rousham is a lovely Jacobean house with Georgian remodelling. The house is set in superb landscape gardens, which have remained unaltered since they were designed in the early 18th century. The gardens, designed by William Kent, were one of the first and most influential of the style which became known as English landscape gardening. The house has been owned by the Dormer family since it was built.

The garden draws most people to Rousham, and deservedly so, but the Jacobean house is worthy of note. It was begun in the 1630s by Sir Robert Dormer on earlier foundations, and despite remodelling in the 18th and 19th centuries, the core of Rousham House is much as Sir Robert would have seen it. The house is situated on a terrace above the River Cherwell, with lawns sloping down to the river. 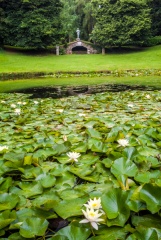 The gardens at Rousham

In the 18th century, the distinction between gardening and architecture was not as distinct as it often is today. In England in particular, the gardens surrounding a house became seen as an extension of the house, with the style of one complementing the other.

Kent redesigned the Jacobean interiors at Rousham, but left untouched the original staircase. Other original features still intact include Jacobean panelling, as well as a variety of 17th-century furniture and portraits.

One of the interior highlights is the parlour, designed by Kent. Indeed, not only did Kent draw up plans for the classically inspired chamber, he is said to have painted the ceiling himself. There are four classical doorways in the parlour, but only one is an actual door; the others are false doors, inserted by Kent purely to provide the symmetry he desired.

Nicolas Pevsner, the prolific architectural historian and writer who may be considered to know a thing or two about English houses, lauded the parlour at Rousham as 'one of the most exquisite small rooms of the 18th century in England.' Moving back to the exterior of the house, Rousham was redesigned in 1876 by John Henry St Aubyn, who altered the north frontage. 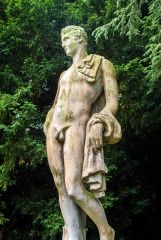 Rousham's place in history is assured as one of the first landscape gardens in England, and one of the most influential. The garden design was begun by Charles Bridgman, the royal gardener, in the 1720s.

In 1738 William Kent was called in to finish Bridgman's design, and the result is a superb early example of formal garden mixed with carefully designed natural landscape style. Kent is famous as the father of the "picturesque", or English landscape garden. He envisioned the landscape as a classical painting, carefully arranged to maximize the artistic effects of light, shape, and colour.

His gardens were dotted with classical temples replete with philosophical associations. At Rousham, Roman elements abound, including statuary, urns, and a classical temple looking over the River Cherwell.

Kent designed the gardens around several ponds and cascades, with wooded glades opening to provide views to classically inspired architectural elements, or follies. There is also an attractive walled garden featured herbaceous plants and a formal parterre.

Located immediately beside Rousham House, and part of the Rousham estate, is the parish church. This is a lovely early medieval building with a sturdy square tower in Perpendicular style. The interior features some lovely medieval tombs and memorials to the Dormer family of Rousham House.

Rousham is a wonderful house and superlative garden, but, sadly, not the most welcoming place for families. As of this writing, no children under 15 years of age are admitted.

Look closely at the front door of Rousham House, and you will see small circular holes lined with lead. These are mementoes of the Civil War, when the owner of the house, Sir Robert Dormer, bored holes in the woodwork to allow defenders of the house to stick their muskets out.

Sir Robert, a staunch Royalist, was aware of the possibility of attack by Parliamentary forces. There is no indication that an attack ever materialized, but the musket holes are a reminder of that dark period of English history. 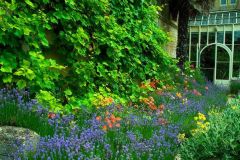 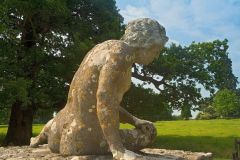 More self catering near Rousham House