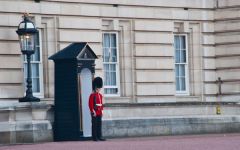 Its an App Generation; everyone and his dog seems to be coming out with apps for everything you can think of. Well, I just ran across a new app that actually looks pretty cool if, like me, you're hooked on British heritage. The Royal Collection has come out with an official Changing of the Guards at Buckingham Palace app. I know, its a bit of a mouthful, but bear with me.

If you're not familiar with the 'Royal Collection', that's the collective name that the royal palaces have decided to use - included in the Royal Collection are Buckingham Palace, Kensington Palace, Windsor Castle, Holyrood House, The Royal Mews and Queen's Gallery, Clarence House, and Frogmore House (Windsor).

Where was I? Ah, yes, the app. Officially, its purpose is to 'enhance the experience' of watching the Changing of the Guards ceremony. How? By giving you a sneek peek behind the scenes in the Guard Room at St James Palace. There are interviews with Guardsmen and a Kid's Zone where children can learn the answers to questions that the younger generation always asks. I'll bet you can instantly think of the most popular question that children ask - 'why do Guardsmen never smile on duty?'

The app includes an interactive map of the route taken by the Guardsmen, including landmarks along the way. Soldiers explain how they keeep their boots so shiny, and how long they spend on duty. Learn how to recognise the different regiments taking part in the Changing of the Guard ceremony through their various bearskin caps and number of uniform buttons.

The Changing of the Guards has been a popular ceremony with visitors to London almost since it began in 1837. It takes place every day at 11:00 from May - end July, and every other day the rest of the year, British weather permitting. Five different regiments of Foot Guards exchange duty with each other in a ceremony that is watched by hundreds of thousands of visitors every year. The official handover of duty is accompanied by marching music played by one of the five bands of the Foot Guards. They do not confine their musical selections to traditional military marches, though, but include popular film scores and pop songs! For an overview of the ceremony see the official description on the Royal Collection website.

The app? Don't worry, I haven't forgotten! You can get more information on the app and download links for iOS at https://www.royalcollection.org.uk/about/news-and-features/changing-the-guard-at-buckingham-palace-app#/. Note that, as of this writing, the app is for iOS only.

Price
I almost forgot! Its only 69p (about $1.12 at current exchange rates)

Disclosure
Er, there is none; we don't get anything for mentioning this (drat!)

Resources
Buckingham Palace - our history of the palace

The Crown Inn Hotel & Restaurant is a family-run freehouse where you are guaranteed a warm welcome an indulgent seasonal menu and a good night's sleep. more >>