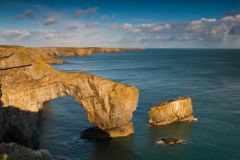 What is the first country in the world to have a national trail stretching the entire length of its coastline? If you said Wales, you're right (award yourself a holiday in Pembrokeshire this summer). On Saturday, 5 May, 2012, the Wales Coastal Path officially opens.

The Path runs from Chepstow in the south east, through Glamorgan and Pembrokeshire in the south west, then up the long curving stretch of Cardigan Bay, around the Lleyn Peninsula, and circles Anglesey before finally turning east again, along the north Welsh coast to the border near Chester. That's 870 miles in total, taking in some of the finest scenery in Britain. And if that's not enough for you, the Path connects up with the Offa's Dyke Trail running north/south along the Welsh border, so that you could walk the entire circuit of Wales, a total distance of 1030 miles.

Large sections of the Path have been in existence for years (for example, the Isle of Anglesey Coastal Path and the Pembrokeshire Coast National Trail), and what the Wales Coast Path project has done is create links between several long distance trails. The Path has its own distinctive waymarker; a stylised white seashell on a blue and yellow background. The Path has its own official website at www.walescoastpath.gov.uk, with resources on planning a trip, information about the different regions along the Path, a photo and video gallery, and links to accommodation along the way.

If the thought of tackling 870 miles of coast path is a little daunting, don't worry! You can enjoy as little or as much of the trail as you like at any given time. Many sections are easily accesssed by road networks, and the official website gives tips on using public transport in each section of the route. The website also suggests sections which may be enjoyed by people with limited mobility, and has recommendations for short and long walks in each area.

I've had the pleasure of walking a few sections of existing coastal paths in Wales (Pembrokeshire, Llyn, and Anglesey) and I have to say it was some of the most enjoyable walking I've ever experienced. The coastal scenery is magnificent. I can't help but wonder who will be the first person to tackle the entire circuit of the Wales Coast Path and Offa's Dyke Trail combined ... maybe you?

The Crown at Playhatch
Reading, Berkshire

A charming 16th century Country Inn with an excellent restaurant and luxurious modern accommodation. Set in the picturesque hamlet of Playhatch, nestled between the Thames and the Chilterns area of outstanding natural beauty, yet conveniently … more >>