The Pembrokeshire Coast Path holds the distinction of being the first National Trail in Wales. Open in 1970, the path is almost entirely contained within the boundaries of the Pembrokeshire Coast National Park. The usual route is to travel from Poppit in the north to Amroth on the south coast. Indeed, the Parks Authority has numbered the stiles along the path, with number 1 at the Poppit end of the trail.

Note that the prevailing wind and sun will usually be in your face travelling from north to south. Walking the entire path should only be undertaken if you are reasonably fit, as the combined ascent and descent is some 35,000 feet, however, the path can easily be accessed by public transportation in most areas, making it easy to take on only small sections at a time.

Aside from the magnificent coastal scenery, the Path takes in no less than 17 Sites of Scientific Interest (SSSI), two nature reserves, and Wales' only marine nature reserve. The cliff tops offer wonderful expanses of wildflowers in Spring (April and May are best). The cliffs at Pwll Granantare, near Ceibwr Bay, are especially notable for their spectacular folds of sandstone and mudstone. Wide variety of birds nest along the cliffs, and grey seals can often be seen in the water below. 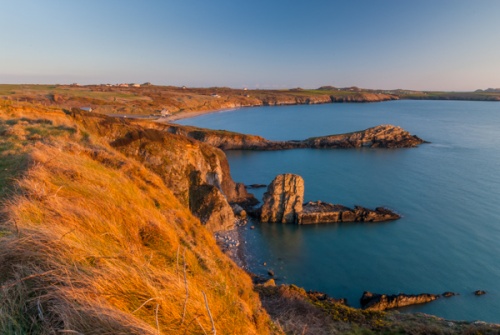 A number of Iron Age remains are scattered along lonely stretches of the coast, and many of these are very close to the path; among them Castell Trerufydd and Garn Fawr, near Pwll Deri.

The most rugged parts of the walk, and those least served by amenities, are in the north, while the south offers many more chances of breaking the walk at one of the numerous pubs in the area! In three locations the high tides in spring will cover parts of the path - but only for an hour or so.

More seriously, the section between Dale and Milford has two spots that can only be crossed at low tide, so it is worth consulting tide tables, or planning to walk an extra four miles to avoid the risk of being caught by the tides. On a more relaxing note, the Path passes near some of the best beaches in Wales along the most southerly sections, making for frequent opportunities to relax.

The Pembrokeshire Coast National Park Authority has published a useful series of online maps for walkers, including notes on the scenery, terrain, and access to the various sections of the Path.

Pembrokeshire Coast Path by Brian John, ISBN 1 85410 459 4. Aurum Press
Official National Trail Guide. If you get no other guide, get this one!

Stillwell's National Trail Companion by Tim Stillwell and Dean Conway, Stillwell Publications - lists accommodation on and near national trails throughout the UK and Ireland