The History of Newgate Prison Review 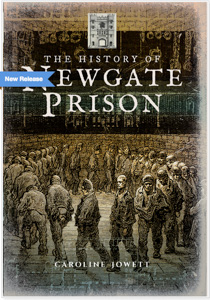 In 1740 the public executioner at Newgate Prison gave the corpse of a thief named William Duell to the Royal College of Physicians to dissect. The College had the right to receive 10 corpses per year for medieval research, and their dissections drew large crowds to Barber-Surgeons Hall in Wood Street. Imagine the scene when the 'corpse' came to life on the dissection table. It seems that Duell had survived his hanging, and regained consciousness just in time to avoid being dissected while still alive. He was not re-executed, but sentenced to transportation to America.

The case of the living corpse is just one of the colourful episodes in the history of Newgate Prison that come to life in this delicious book by Caroline Jowett. In this thoroughly researched and colourfully written little book the story of Newgate comes to life.

Jowett traces the history of Newgate Prison from its origins in 1188 to its demolition in 1902, and along the way gives us an insight into the history of London itself.

Newgate was established by Henry II beside one of the city gates of London, dubbed 'New Gate'. From the beginning, Newgate was simply a holding place for prisoners awaiting trial, not a place to serve a sentence. From the beginning, the prison was divided into two parts, one for the wealthy (called 'masters') and one for common folk.

Cleanliness was not a consideration, even on the Masters' side of the prison, and contemporaries complained of the 'fetid and corrupt atmosphere'. Over the centuries the stench of Newgate became legendary.

Yet there were compensations - if you had enough money. Prisoners could bring their own bed into their cell, and buy good food and wine from the gaoler. Ah, but woe betide those who did not have money to pay for such luxuries!

In 1423 Dick Whittington, three times Lord Mayor of London, left money in his will to rebuild the 12th-century prison. The new gaol was dubbed 'The Whittington', or in thieves slang simply 'The Whit'.

Conditions in The White were not much better. Those who could pay for the privilege might be held in a private room, and might even have a window and fireplace, but on the common side of the gaol, prisoners were held in squalid conditions of almost unimaginable misery. There were frequent outbreaks of 'gaol fever', known to inmates as 'crinkums', which we now know to be a form of typhus.

The prison was a private enterprise, not a public service. Gaolers made a decent living, because prisoners had to pay for their keep. Each prisoner paid a day rate, and on top of that had to pay for bedding and food. Even if you paid for a loaf of bread there was no guarantee that it wouldn't be adulterated with cheap substitutes for flour, such as chalk or alum. You could also pay to wear lighter leg irons.

Poor prisoners begged through iron grates leading to the outside street, using long spoons and deep bowls to reach as far as possible into the street. Passersby were wary of having their pockets picked as they walked by the grilles, so tended to give the prison wall a wide berth.

The history of Newgate is fascinating, but what really makes Jowett's book so enjoyable to read are the personal stories of the inmates, both the famous and the infamous.

Among the most famous inmates were Sir Thomas Mallory, who dir more than anyone to popularise the story of King Arthur and the Knights of the Round Table with his romance 'Le Moret d'Arthur', partly written while he was held in Newgate on charges of rape, extortion, theft, property damage, and the attempted murder of the Duke of Buckingham.

A later prisoner was William Penn, a Quaker and founder of Pennsylvania. Then there was author Daniel Defoe, who was imprisoned for seditious libel. His later novel 'Moll Flanders' drew on those experiences, and was partly set in Newgate, where Moll languished.

For every tale of a famous prisoner, there's the story of ordinary men and women who suffered imprisonment at Newgate. One such story involves 'The Vere Street Coterie', a group of six gay men pilloried for 'unnatural offences' at a gay club called The White Swan. The men were so badly beaten in the pillory that they were almost unconscious. The Morning Chronicle newspaper decried the men's treatment, but blamed their 'unnatural' crimes on war and foreigners.

Then there's the story of Roger Godberd, who served under Simon de Montfort in his rebellion against Henry III in 1263. He escaped capture at the Battle of Evesham, where de Montfort was killed, and became an outlaw in Sherwood Forest, where he led a band of about 100 men. He was finally captured by the Sheriff of Nottingham and was later held in Newgate Prison before his trial at the Tower of London. He is thought to have died in Newgate in 1276, though another account says that he survived and died of old age at his home. Was Roger Godberd the real Robin Hood? That's just one of the intriguing historic tales in this wonderful book.

The best compliment I can pay is that I found the book almost impossible to put down. It is an engrossing read, well written, and a fascinating piece of British history.

The History of Newgate Prison is published by Pen and Sword Books and is available from the publisher and from Amazon.com and Amazon.co.uk in both paperback and Kindle versions.

The Angel restaurant at Long Crendon. This 16th century coaching inn nestled in a picturesque village on the Bucks, Oxfordshire borders has built up a reputation for being one of those rare places that combines …