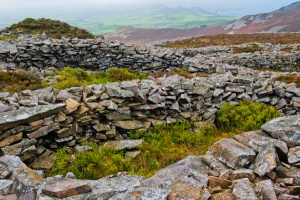 In the years following 1400 BCE, the upland climate grew colder, and the higher elevations were abandoned. Stone circles, cairns, and beakers gave way to bronze and gold tools, ornaments, and weapons. Wales seems to have developed a highly skilled tradition of craftsmanship in the manufacture of bronze tools, particularly axes.

The pressures of a rising population and subsequent competition for land created an unstable society. One of the consequences of this instability was the widespread growth of hill forts as a defensive measure.

Hill forts
The earliest of the hill forts in Wales - at Dinorben - has been dated to about 1000 BCE. The term "hill fort" is a rather loose one encompassing a variety of enclosed defensive structures, generally built on prominent, easily defended hilltops.

These enclosures, some 600 of which have been found in Wales, range in size from large communal sites of over 15 acres to small rings which probably encircled a single farmstead. Archaeological finds at the few hill forts that have been thoroughly excavated allow us to draw a few tentative conclusions about the lives of these late Bronze Age and Iron Age inhabitants.

Although the presence of grain mills indicates that some harvesting of that foodstuff was carried on, by far the largest amount of remains is that of animal bones, a pretty clear mark of the level of importance given to stock-husbandry.

Raths
A common variation on the hill fort idea is the rath, or cliff fort, often found in southwest Wales. In this style of construction, a ditch and dyke cut across a headland or promontory, creating an enclosure defended on three sides by the sea. These cliff forts are often small, enclosing a handful of huts, which suggests that they were little more than family sanctuaries.

At the opposite end of the settlement spectrum - and the opposite end of Wales - is Tre'r Ceiri in Gwynedd. This village site is encircled by stone walls which rise to over 14 feet in height in places, and enclose 150 huts built of stone with turf roofs. The site first saw settlement about the year 200 BCE, and there is a possibility that it was merely the summer upland quarters of a community of shepherds.