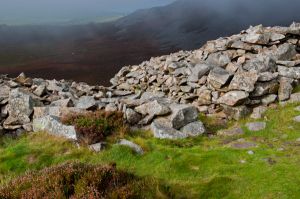 One of the finest and certainly one of the best-preserved Iron Age hillforts in Britain, Tre'r Ceiri occupies a large hilltop site overlooking Trefor to the north and Llanaelhaearn to the east. The name Tre'r Ceiri translates as the City of Giants, a tribute to just how impressive later inhabitants of the area found the remains of the settlement!

The fort covers 2.5 hectares, encircled by a dry stone wall. As impressive as the wall is now, it is even more impressive to realize that it originally stood over 4 metres high. It was built from loose stone gathered from the scree on the hillside. The wall originally featured a stone parapet walkway, which can still be glimpsed in places.

Within the wall are the remains of over 150 stone-built huts, most circular, or oblong in plan. The earliest settlement atop the hill predates the Roman appearance here in AD 78.

The fort continued to be occupied throughout the Roman period when further huts were added and the defences strengthened. Tre'r Ceiri was finally abandoned in the 4th century.

The view from the top is wonderful and is ample reward for the stiff climb to the top. The most direct route is by a signed footpath that runs off the B4417 just west of Llanaelhaearn village (park in a roadside layby).

Or, a longer path originates from Llithfaen village (easier parking). The trail is steep but easy to follow. Be aware, though, that the weather can change with rather alarming suddenness, and the hilltop can be covered in thick cloud.