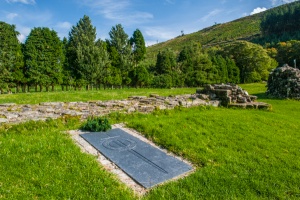 After the death of Dafydd ap Llewelyn, Gwynedd was ruled jointly by his nephews Owain and Llewelyn ap Gruffudd. The two brothers could do little against the English who battered at their borders, and in 1247 they did homage to Henry at Woodstock. Under the Treaty of Woodstock, they were confirmed as lords of Gwynedd Uwch Conwy, and the Welsh kingdom became (at least for the moment) a part of English territory.

In 1252 Llewelyn moved to gain hegemony for himself. He imprisoned Owain and Dafydd, another brother, and proclaimed himself sole ruler of Gwynedd. In 1256 he added Perfeddwlad to his possessions.

That was just the beginning; Llewelyn swept through Wales like a hurricane. He seized Builth and pushed Gruffudd ap Gwenwynwyn out of Powys Wenwynwyn. Henry III attacked Gwynedd to little effect, and the remaining Welsh princes allied behind Llewelyn.

Henry was hampered in his attempts to deal with Llewelyn by his struggles with his own barons, who united under Simon de Montfort. Llewelyn took advantage of his enemies' discomfiture to attack the lands of the Marcher lords in Brecon and Abergavenny. His campaigns were indecisive, and his brother Dafydd deserted Llewelyn's cause.

However, Gruffudd ap Gwenwynwyn came to his side, and in 1264 Llewelyn allied with de Montfort. After Simon de Montfort defeated Henry at the Battle of Lewes, he recognized Llewelyn as Prince of Wales in the Pipton Agreement (although as a vassal of the English crown).

However, Simon de Montfort's rule was short, and Henry III was soon back in power. In 1267, the Treaty of Montgomery confirmed the majority of the Pipton Agreement. The cost of this concession by Henry was great, and Llewelyn promised to pay the crown £16,666.

Under the Treaty of Montgomery Llewelyn was recognised as prince of all Wales and overlord of all Welsh princes bar Maredudd ap Rhys, ruler of Dryslwyn.

In return, Llewelyn paid homage to the king and returned some lands he had taken in Cheshire and Shropshire. Llewelyn's actual status is not clear, however. Certainly, he seems to have regarded himself as an independent ruler, a feudal vassal of Henry, certainly, but not a subject of the English crown.

Llewelyn's position within Wales was not unchallenged. He was not his father's heir, and his elder brother, Owain, was imprisoned, a fact which bothered his contemporaries. His younger brothers Rhodri and Dafydd also claimed the right to share Llewelyn's power, which, under Welsh custom, they were entitled to do. He was unmarried and had no heir. He was chronically short of the funds he needed to comport himself as a proper ruler (and to pay his enormous debts to Henry).

Powerful Marcher Lords such as the Bohun, Clare, and Mortimer families turned hostility into open conflict. In 1274 Gilbert de Clare invaded Glamorgan to extinguish any trace of Welsh rule. More dramatically, Llewelyn's brother Dafydd and Gruffudd ap Gwenwynwyn were forced to flee to England after a plot to kill Llewelyn was discovered.

Llewelyn tried to establish his royal links more forcefully by contracting a marriage with Elinor, daughter of Simon de Montfort. A proxy marriage took place in 1275, but when Elinor sailed from France to meet her bridegroom for the first time, Edward I of England seized the ship and imprisoned her at Windsor.

Edward, now king in name as well as fact after the death of the ineffective Henry III, must have regarded Llewelyn as a serious threat. Certainly, he did not take kindly to the idea of the Welsh prince marrying the daughter of the man who had been the largest threat to his father's power.

Edward attempted to bring Llewelyn to heel. He summoned the prince to appear before him on five separate occasions, but Llewelyn ignored his feudal overlord, protesting that he was not safe at a court that harboured his enemies. In 1276 Edward declared Llewelyn a rebel, and the following year he gathered a large army and marched deep into Welsh territory.

Llewelyn had no choice but to give way, and by the Treaty of Aberconwy (1277) his territory was once more restricted to Gwynedd Uwch Conwy, and his brother Dafydd was granted some of his land.

Llewelyn did homage to Edward, and in 1278 was allowed to marry Elinor. Unfortunately for Llewelyn and for the future of Welsh independence, Edward did not stop at his first triumph. He claimed northern Ceredigion and began building a string of strong castles at Aberystwyth, Flint, Rhuddlan, and Builth to enforce his presence in Wales.

Bit by bit Edward and his officials gradually extended English control within Wales. In so doing, they alienated leaders disposed to be their allies; in 1282 Dafydd had had enough, and launched an attack on Hawarden Castle.

Dafydd's uprising spread quickly, and Llewelyn gave it his support - perhaps spurred by the death of Elinor in giving birth to a daughter, Gwenllian.

Edward made a show of offering concessions, but the arrogance of the terms made it impossible for the Welsh leaders to accept. The Welsh turned back an attempted crossing of the Menai Straits, forcing Edward to borrow heavily and assemble a larger force of men.

At this juncture, Lady Luck took a hand. On October 11, 1282, Llewelyn was killed at Cilmeri, near Builth, by an English soldier who did not realise he was doing battle with the prince.

Llewelyn's body was buried at Cwmhir Abbey, while his head was sent to London as proof of his death. Dafydd carried on the revolt into the following year but to no avail. He was eventually captured and put to death at Shrewsbury.

Back: Edward II and Wales
Next: 14th century Wales