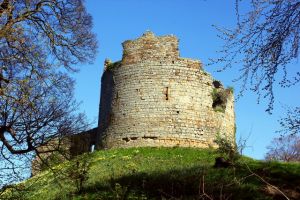 Hawarden Old Castle
A Norman earthwork motte survives of an early castle that was later built in stone about 1280. A well preserved circular keep and scant remains of a rectangular tower remain from the stone castle.

The castle was owned by Simon de Montford, leader of the baron's revolt against Henry III. In 1264 de Montfort met with Llewelyn ap Gruffudd at Hawarden, and agreed to grant him the castle and arranged a marriage to his daughter Eleanor in exchange for Llewelyn's support. When Simon died at the Battle of Evesham, Llewelyn seized the castle by force, but he returned it in 1267 to the Monthaut family.

On Palm Sunday, 1282, Dafydd ap Gruffudd, Llewelyn's volatile brother, launched a three-pronged attack on English castles, Hawarden among them. Though Dafydd was able to seize the castle, he could not hold it, and both Welsh princes were killed shortly afterwards - in Dafydd's case rather unpleasantly, for Edward I had him hung, drawn, and quartered.

The castle was rebuilt in stone (a transformation possibly begun before Dafydd's attack), and it withstood attack during Owain Glyndwr's 1405 rebellion. It was besieged for 10 months in the Civil War before finally falling to Parliament.

Note that the castle is located on the New Hawarden Castle estate and is only open to the public on occasional Sundays.