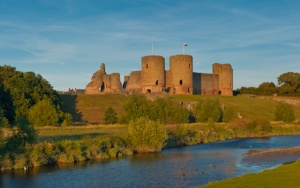 Edward I might be forgiven for thinking that the deaths of Llewelyn and Dafydd of Gwynedd had removed the last legitimate barriers to his control of Wales. If he ever dared hope for such an easy conquest, he was soon proved wrong.

A succession of minor revolts kept the English busy. Edward was forced to spend long periods in Wales. He gradually extended English influence, at least partly by chipping away at Welsh law and establishing English legal traditions.

One of the tools Edward used to effect this change was the Statute of Rhuddlan (later, and erroneously called the Statute of Wales). According to this statute, the counties of Anglesey, Meirionnydd, and Caernarfon were created out of the remnants of Llewelyn's Gwynedd, and staffed with sheriffs to collect taxes and administer justice - English style justice using English Common Law. In addition, the offices of justice and chamberlain were created to assist the sheriff.

The Statute of Rhuddlan helped define the roles of these officials and the means by which they were to enforce this essentially foreign system of law within the areas of English influence in Wales.

Although initially the Statute had a limited geographic scope, it provided the basis for future attempts to assert English law and jurisdiction over the Welsh. Although Edward allowed the Law of Wales (see Hywel the Good) to hold sway in minor matters, it was English Law which was used to oversee serious crimes.

Back: Llewelyn the Great
Next: Edward I's Castles in Wales