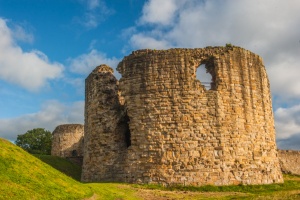 Edward I of England spent a great deal of time - and money - ensuring that he held his new lands in Wales. He built major castles at Caernarfon, Criccieth, Harlech, Beaumaris, and Conwy in addition to the strongholds at Aberystwyth, Flint, Rhuddlan, and Builth he had constructed after the Treaty of Aberconwy (see article).

In the process, he evolved a new style of military architecture known, not unnaturally, as "Edwardian castles". Edward's architects discarded the common keep design in favour of a concentric model which could be used as a base for offensive operations rather than as a purely defensive stronghold.

Concentric castles have no central strong point like a keep. Instead, they rely on rings of walls, one inside the other, with towers along the length of the walls.

Most Edwardian castles have three concentric rings of walls and towers. The central space was kept as an open courtyard around which were clustered separate domestic buildings. The outer wall was ringed by a moat with access over a draw bridge through a separate gatehouse or barbican.

The beauty of the Edwardian design is that the walls could be easily defended. The fortified towers built into the walls provided covering fire for each other. Defenders could provide cross-fire along the walls between neighbouring towers.

Edward came up with a further innovation at Caernarfon and Conwy. Instead of a separate castle standing on a high point with the settlement spread out around it, the castle walls enclose the entire medieval town. So the castle walls are also the town walls. 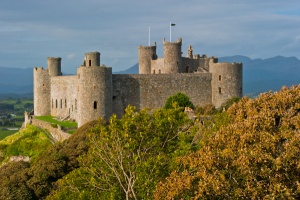 The reason for the strong defensive walls becomes clear when you consider that Edward not only imported builders, he imported a whole population of English settlers! These new settlers were carefully protected from the local Welsh population by the castle and town walls. In a sense, Conwy, Caernarfon, and Beaumaris became outposts of England within hostile enemy territory.

The man most responsible for Edward's Welsh castles was the architect James of St. George. James was a Savoyard (from modern Italy), and he incorporated elements in his design from Europe and the Middle East.

Edward consciously chose to suppress elements of Welsh tradition and heritage. Conwy Castle was built over the traditional burial place of Llewelyn the Great, and the monastery at Aberconwy was destroyed and the monks moved to a new foundation at Maenan.

The expense of Edward's subjugation of Wales and his subsequent building projects was enormous. Edward was forced to borrow heavily from foreign bankers and to ask Parliament for frequent funds.

A man who needs money is not in a strong bargaining position; Edward was forced to grant concessions in exchange for the money he needed, and during his reign, Parliament gained considerable power and influence.

Back: Rhodri the Great
Next: Grufudd ap Llewelyn

Attractions associated with Edward I