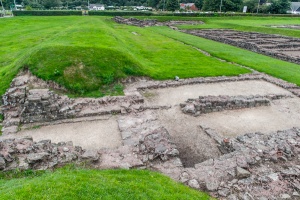 In the years following 70 AD fresh forts were built by the Romans at strategic locations along the Welsh borders, notably at Chester and Caerleon. Huge numbers of troops - as many as 30,000 at any one time - were flung into Wales, where the tribes resisted using guerilla tactics unfamiliar (and thoroughly exasperating) to the Romans.

At least 35 smaller fortified camps were built to support these troops, and linked with a network of roads (see map). If we can judge by the location of these forts, the Deceangli of the north and the Demetae of south-west Wales must have offered little opposition to the Romans.

Such is not the case with the Silures in the south-east and the Ordovices in the north-west, whose territories are dotted with Roman strongholds. Investigation of remains at these forts suggests that the Silures gradually adapted to the presence of the Romans among them and gave little trouble after the mid 2nd century.

If the Silures finally bent a grudging knee to the might of Rome, such could not be said for the Ordovices. The north-west of Wales remained a source of irritation to the Romans for generations to come, if we can judge by the continued military presence and lack of villas in this area. Settlements (vici) grew up around the major Roman forts of Caerleon, Caernarfon, and Caersws. The Romans granted the right to build a "civitas", or self-governing city, to tribes whose allegiance was secure.

The Cornovii had Viroconium (Wroxeter), which grew to be the fourth largest city in Roman Britain. The Silures had their own civitas at Caer-went, which eventually grew to house some 1500 people and was for several centuries the largest population centre within Wales.

These civitas had all the amenities one would expect of a full Roman city - to whit, public baths, a forum, a basilica, temples, and merchants houses complete with all the "mod-cons". Carmarthen may also have been a civitas, though this is less clear.

What is clear, however, is that the area surrounding both these urban centres hosted a large number of villas, which indicates that the area was safe from the unrest of the north. A dozen villas have been found in Wales, the largest at Llantwit Major.

The upper classes of Wales adopted the trappings of Roman civilisation, including the state religion. A variety of other religious cults had their adherents, and druidism survived despite the best efforts of the Romans to stamp it out.

The Romans attempted to subvert allegiance to the old Celtic gods by linking them with Roman gods. Thus, for example, the Roman god Mars was linked with the Celtic Oculus. Many of the old Celtic gods were transformed in time into the human heroes eulogized in the tales of the Mabinogion.

The bulk of the populace would have continued to worship as before, in an odd mixture of mystery cults and bastardized versions of Roman and Celtic beliefs.

Although the language of the aristocracy and the Romanized cities, was Latin, the vast majority of the population still spoke a version of Brittonic.

It is tempting to think of Roman Wales only in terms of its relation to Britain and the Empire as a whole, but that lopsided view ignores the physical and cultural proximity of Ireland to the west. Irish pirates seem to have been a constant nuisance, and Irish settlers made several attempts to colonise the western Welsh peninsulas.

The tumultuous politics of the Roman Empire deserve a note here. The course of the later Empire (c 200-400) was a rocky one. Emperors came and went with bewildering frequency; sometimes several at a time.

The territory of modern Wales even had its own Emperors from 286-296, Carausius (Carawn in Welsh legend), and Allectus. The latter was defeated by Constantius, who ruled the Empire in the West, while Diocletian managed affairs in the East. This split in the Empire was followed by a further split in the governing of Brittania, which was divided into four pieces. Although the divisions are not clear, it seems likely that Wales was part of Brittania Prima, which had its capital at Cirencester.

Throughout the second half of the 4th century, the Empire became increasingly unstable; barbarian attacks on the borders increased, and it seems that the legions were gradually withdrawn from Wales to counter threats on the continent.

By 390 AD there were probably no Roman troops remaining within the borders of Wales. In the next few decades, most of the legionaries in England followed and Brittania was essentially undefended.

The Irish saw their chance; in 405 pirates under Nial ravaged the western coast, and may have precipitated a fresh influx of Irish settlers.