The Battle of Edington 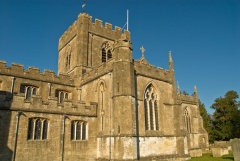 WHERE
Ethandun (Edington), near Trowbridge, Wiltshire

WHO
Danes under Guthrum vs. Saxons under King Alfred of Wessex

WHY
In the late 9th century the Danes had slowly but surely infiltrated the British Isles and pushed back the Anglo-Saxon inhabitants. They already held the north and east of the country. A temporary defeat at Ashdown had interrupted, but not stopped, the Danish advances. Under Guthrum, they pushed into Wessex from the south and east. They launched a winter attack on a surprised King Alfred at his court of Chippenham.

Alfred's court fled, and he was forced to take refuge in the marshes of Athelney, in Somerset. There, with a few of his supporters, he held out through the winter. When spring came, Alfred sent out a call to his fyrd, or army, to assemble at an unknown place called Egbert's Stone. From there they marched in force to Edington, where Alfred challenged Guthrun to do battle.

THE BATTLE
Alfred's fyrd used a tactic familiar to the Roman infantry, called a shield wall. Shields were placed side by side, creating a solid wall. Spears were thrust through small openings in the shield wall. In a fierce battle that lasted all day, Alfred's men wore down the Danes. He chased the Danes back to Chippenham, and trapped them within his own fortress there. After 14 days of starvation the Danes sued for peace.

Alfred was a realist; he realised that he could never hope to drive the Danes out of the rest of England. The best he could hope for was to consolidate his current possessions. By the terms of the peace agreement, known as the Peace of Wedmore, Guthrun agreed to withdraw to territory already under Danish control, that is, behind the Roman Watling Street. In addition, he and his captains were baptised into Christianity.

RESULTS
The short term result of the victory at Edington was the withdrawal of Guthrun and his Danish forces to the area we now call The Danelaw. There, Danish law and custom applied.

As for Alfred, he knew only too well that his victory would be meaningless unless he followed it up with measures to strengthen the area under his control. The solution he evolved was the encouragement of burhs, or fortified towns. Alfred encouraged settlement of these towns, which acted as a string of border fortresses, armed and held at the ready against possible Danish incursions.

This system did much to stabilize the political situation and bring a measure of peace to the ravaged islands.