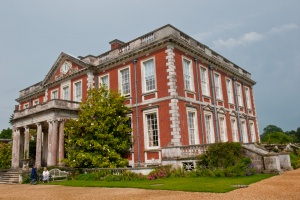 When Queen Anne died without any heirs, the English throne was offered to her nearest Protestant relative, George of Hanover, who thus became George I of England. Throughout the long reign of George, his son, and grandson, all named George, the very nature of English society and the political face of the realm changed.

In part this was because the first two Georges took little interest in the politics of rule, and were quite content to let ministers rule on their behalf. These ministers, representatives of the king, or Prime Ministers, rather enjoyed ruling, and throughout this "Georgian period" the foundations of English political party system was solidified into something resembling what we have today.

But more than politics changed; English society underwent a revolution in art and architecture. This was the age of the grand counry house, when many of the great stately homes that we can visit today were built.

Abroad, the English acquired more and more territory overseas through conquest and settlement, lands that would eventually make up an Empire stretching to every corner of the globe.

Georgian Britain - from 'A History of the British Nation' (1912) - includes events on the continent and overseas colonies.

Georgian attractions in Britain (places to see tagged with 'Georgian')

Related - not precisely Georgian, but not quite Victorian either!
John Nash, Regency Architect
Almack's Assembly Rooms