The Battle of Evesham

WHO
An alliance of rebellious barons under Simon de Montfort vs. royal forces under Prince Edward (later Edward I).

WHY
Montfort and his allies rebelled against what they saw as poor government and excessive spending on foreign wars by Henry III. Initial success at the Battle of Lewes gave Montfort practical control of the government, and he instituted reforms which eventually led to the English Parliamentary system of government by representation.

However, Montfort was undone by his bickering allies, and Prince Edward escaped from captivity to raise the royal standard on the Welsh Marches. Montfort, carting along the King, marched north, intending to join forces with his son at Kenilworth, near Warwick. Edward got there first, routed the younger Montfort, and surprised Simon at Evesham.

In a story which is likely apocryphal, Montfort, realising that his army was trapped in a loop of the River Avon by a superior force, said to his aides, "

Let us commend our souls to God, because our bodies are theirs". He was right.

THE BATTLE
Montfort's already slim chances of breaking through the royal lines were made even more remote when his Welsh allies deserted before the battle was joined. This left him facing an enemy with perhaps four times the number of his own troops.

Montfort's men charged uphill against the royal lines, but they never stood a chance. Edward's wings pivoted and converged on Montfort's flanks, and the fight quickly became a massacre.

Even the fleeing Welsh were cut down or drowned in the river. No quarter was given to the rebels, and the carnage was terrible. Montfort's body was badly mutilated and dispersed to different parts of the kingdom. His torso, at least, was sent to Evesham Abbey, where his tomb became a popular pilgrimage centre.

THE RESULTS
Evesham marked the end of the so-called Baron's War. A few futile skirmishes followed, but the result was a foregone conclusion. Henry III was restored to power and the remaining sons of Montfort eventually fled the country. Prince Edward also proved himself an able and talented military leader, a fact which his later career in Wales and Scotland certainly bears out.

The site of the Battle of Evesham lies just off Greenhill, on the northern edge of Evesham. A heritage trail designed by the local heritage society leads from the centre of Evesham, along the High Street, then rises up Greenhill before turning left onto a footpath to farm fields where an information panel gives an overview of the battle and where the opposing armies arrayed themselves.

The trail continues through the battlefield site before looping back into Evesham. I've taken the circular walk and it took me about 1 hour and 10 minutes of brisk walking to complete the circuit. Here is more on visiting the Battle of Evesham Battlefield site. 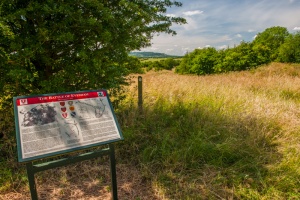 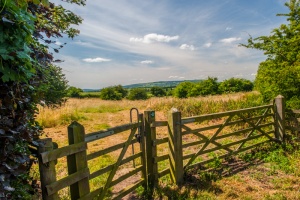 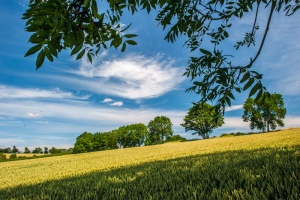 The battlefield from the south-west