The Battle of Maldon 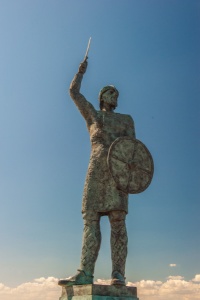 WHO
Saxons led by Earl Byrhtnoth vs. Vikings under Olaf Tryggvasson

WHY
Viking raiders had made frequent raids in search of plunder on the coast of Britain since the 5th century or earlier. In the late 10th century these raids became more cohesive - and more difficult to oppose. In mid-August of 991 a force under the leadership of Olaf Tryggvasson descended upon the coast of Essex.

Olaf's men appear to have been far more organized than the usual motley collection of raiders, and the entire force may have numbered as many as 3,000 men. In charge of the native defences was the ealdorman Byrhtnoth, the leading representative of King Aethelred in that region.

THE BATTLE
The Vikings landed on Northey Island, which was linked to the mainland by a low causeway. The causeway was flooded at high tide, and while the Vikings waited for the tide to recede, Byrhtnoth hastily drew together a force of local militia. The Vikings shouted their demands for tribute, but Byrhtnoth refused and prepared his men for battle at the south end of the causeway.

As the water receded the Vikings advanced, but three of Byrhtnoth's men were able to hold the narrow causeway against them. The Vikings withdrew and asked to be allowed to pass unhindered to dry ground so that they could continue the fight on a fair basis. Though Byrhtnoth was in a virtually unassailable position, he agreed to let the Vikings access the mainland. Though chivalrous, Byrhtnoth's move was foolhardy in the extreme.

When the Vikings had gained firm ground the battle was re-engaged. The fighting was fierce, but the issue was decided when Byrhtnoth himself was slain. His supporters fled the field, all but a group of his thegns who elected to die in battle in a vain but heroic attempt to avenge their lost leader.

The Results
In the aftermath of the Battle of Maldon, the Vikings exacted tribute from local leaders in Hampshire, Kent, and the west of present-day England. Aethelred was forced to give them five tons of silver, paid for by a special tax which came to be known as danegeld. Laden with their gains, the Vikings withdrew, promising to keep the peace and oppose any other Viking force threatening Britain.

It is doubtful that they ever intended to abide by the terms of their treaty, and sure enough, within a few years, the Vikings were back.

It could be argued that the Battle of Maldon had no lasting effect. It did, however, leave an indelible image on the English imagination, fostered by an epic poem about the battle written by an unknown Anglo-Saxon poet. The poem, of which only fragments remain, tells the tale of Byrhtnoth in stirring detail, and it is through this poem that most of what we know about the battle has been preserved.