"To see a World in a grain of sand
And a Heaven in a Wild Flower,
Hold Infinity in the Palm of your hand
And Eternity in an Hour."

from 'Auguries of Innocence' 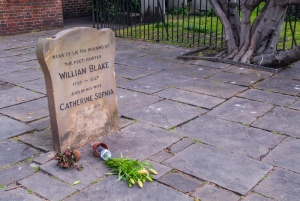 William Blake was born on 28 November 1757, in London, the third of five children. His father James was a hosier, and could only afford to give William enough schooling to learn the basics of reading and writing, though for a short time he was able to attend a drawing school run by Henry Par.

William worked in his father's shop until his talent for drawing became so obvious that he was apprenticed to engraver James Basire at age 14. He finished his apprenticeship at age 21, and set out to make his living as an engraver.

Blake married Catherine Boucher at age 25, and she worked with him on most of his artistic creations. Together they published a book of Blake's poems and drawings called Songs of Innocence.

Blake engraved the words and pictures on copper plates (a method he claimed he received in a dream), and Catherine coloured the plates and bound the books. Songs of Innocence sold slowly during Blake's lifetime, indeed Blake struggled close to poverty for much of his life.

More successful was a series of copperplate engravings Blake did to illustrate the Book of Job for a new edition of the Old Testament.

Blake did not have a head for business, and he turned down publishers' requests to focus on his own subjects. In his choice of subject Blake was often guided by his gentle, mystical views of Christianity. Songs of Experience (1794) was followed by Milton (1804-1808), and Jerusalem (1804-1820).

In 1800 Blake gained a patron in William Hayley, who commissioned him to illustrate his Life of Cowper, and to create busts of famous poets for his house in Felpham, Suurey.

While at Felpham, Blake was involved in a bizarre episode which could have proven disastrous; he was accused by a drunken soldier of cursing the king, and on this testimony he was brought to trial for treason. The cae against Blake proved flimsy, and he was cleared of the charges.

Blake poured his whole being into his work. The lack of public recognition sent him into a severe depression which lasted from 1810-1817, and even his close friends thought him insane.

Unlike painters like Gainsborough, Blake worked on a small scale; most of his engravings are little more than inches in height, yet the detailed rendering is superb and exact. Blake's work received far more public acclaim after his death, and an excerpt from his poem Milton was set to music, becoming a sort of unofficial Christian anthem of English nationalism in the 20th century.

William Blake died on August 12, 1827, and is buried in an unmarked grave at Bunhill Fields, London.