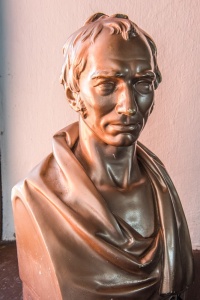 Richard Trevithick was born in 1771 in Illogan, Cornwall. He was tall and athletic, interested more in sports than learning at school. He grew to a height of six feet two inches, and was commonly called the "Cornish Giant". A man of prodigious strength, Trevithick was one of the best wrestlers in Cornwall.

Richard worked with his father in Wheal Treasury mine, but it became obvious that the younger Trevithick had an aptitude for engineering. He was appointed engineer for the Ding Dong mine in Penzance. There he created a high-pressure engine for raising the ore from the mine.

Trevithick was fascinated by the possibilities of steam engines. He experimented with a model locomotive, and in 1796 produced a working engine/boiler combination.

Encouraged by his success, Trevithick produced a larger steam road locomotive, the Puffing Devil. On Christmas Eve, 1801, his new locomotive took him and some friends on a short journey. Although the results were positive, Puffing Devil could not hold steam for long, which made its use impractical.

Trevithick showed his designs to several leading scientists, including James Watt. Watt argued that his use of steam at high pressure was dangerous. Trevithick later accused Watt of using his influence to get Parliamentary to ban his experiments.

Trevithick was backed by a succession of sponsors, but his early designs either broke down or proved too heavy. In 1804 he created the first steam locomotive to successfully run on rails - The Penydarren - which made three journeys between the Penydarren ironworks near Merthyr Tydfil and the Merthyr-Cardiff Canal. However, the 7-ton locomotive was so heavy that it broke the rails on every trip, and the project was abandoned.

The next attempt was the fancifully named Catch Me Who Can, which in the summer of 1808 ran on a circular track in Euston Square, London. The engine took on passengers at one shilling each and reached speeds of 12 miles per hour, but it, too, proved too heavy for its rails.

Discouraged by lack of financial backing, Trevithick returned to Cornwall. There he developed a new version of the Cornish engine, which was used worldwide in stationary mining applications.

Later, he worked as a mining engineer in Peru, where he made enough money to buy his own silver mine. When civil war erupted, Trevithick was forced to flee the country without his fortune.

He was refused a government pension, despite attempts by George Stephenson to win him recognition for his essential role in the development of steam locomotives.

For the next several years Richard Trevithick lurched from one financial failure to the next, until he finally died on April 22, 1833, in Dartford. He was so destitute at the time of his death that it took a collection by local workmen to prevent this tireless inventor from hasty burial in a pauper's grave.

Trevithick's use of steam under high pressure was essential to the development of effective railway engines. He can be rightly credited with being the father of steam locomotion.