How does a used-candle seller found one of the most successful and prestigious businesses in British history? Well, if your name is William Fortnum and the candles in question belonged to the royal family, you are well on your way to business success. It all came about like this. 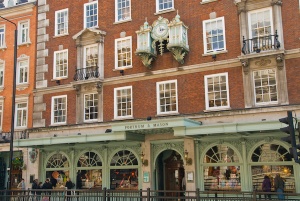 Fortnum and Mason's
shop near Piccadilly

William Fortnum became a footman in the royal household of Queen Anne in 1707. Every night he replaced the candles used by the royal family with new ones. The used candles he promptly resold to ladies of the royal household for a tidy profit. The enterprising Mr Fortnum also had a sideline business as a grocer.

Fortnum then convinced his landlord, Hugh Mason, to go into the grocery business with him, and they set up a shop called Fortnum and Mason, in Piccadilly. Fortnum used his palace connections to drum up business and the store prospered. Mason expanded to start Mason's Stables, which can still be found just off Duke Street. Although Fortnum and Mason were successful, it was up to subsequent generations of the founders to elevate the company to the status it enjoys today.

In 1761 Charles Fortnum, grandson of William, went into service of Queen Charlotte, and once again the royal connection paid off in increased business. The store in Piccadilly introduced speciality items aimed directly at the well-heeled residents of the area. Such delicacies as game in aspic jelly embellished with prawns and lobster were provided ready-to-eat.

The Napoleonic Wars provided another boost to business, as many officers ordered packaged supplies from Fortnum and Mason for their sustenance on campaign.

The focus on ready-to-eat luxury dishes continued into the Victorian period, and the company was often called upon to provide edibles for court functions. Fortnum's also prospered through the misfortune of others. When Florence Nightingale publicized the misery of wounded men in the Crimean War, Queen Victoria ordered shipments of Fortnum and Mason's concentrated beef tea be sent to the field hospitals. 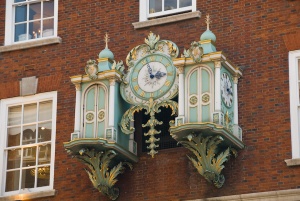 The Fortnum and Mason's clock

The firm received numerous Royal Warrants during the reign of Queen Victoria. A royal warrant is basically permission from a member of the royal family that allows a company to use an official seal in their advertising and a phrase like, "By appointment to Her Majesty, Queen Victoria". And of course, others want to shop where the royals shop, so business booms.

Fortnum and Mason supplied Victorian high society with the food for events like the Ascot races and the Henley Regatta. They specialized in providing picnic hampers stocked with elegant provisions for such occasions, and on Derby Day Piccadilly was jammed with coaches queuing to receive their hampers.

In 1964 Fortnum and Mason built a huge, ornate clock to grace the outside of their Piccadilly home. Every hour four foot high mechanical replicas of the original Mr Fortnum and Mr Mason emerge and bow to each other to the sound of chimes and authentic 18th-century music. The clock is massive, weighing in at over four tonnes.

The store in Piccadilly now sells luxury goods of all description, from fine crystal and porcelain to linen and bath accessories. They still sell personalized hampers for travellers on the Channel Tunnel or aeroplane flights. And you don't have to be in London to enjoy Fortnum and Mason. You can select and order a hamper from the company web site at www.fortnumandmason.com

Moving with the times, this most prestigious British firm has kept up its reputation for superb quality and selection - at a price. And to think it all began with used candles! ,/p>

Fortnum and Mason are located at 181 Piccadilly, London, W1A 1ER