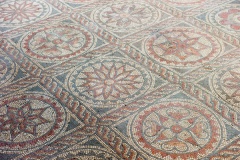 A municipium was the second-highest rank of Roman city, following after colonia. Each colonia was governed by an ordo (council), under the control of four annually elected magistrates (two duoveri and two aediles).

Unlike colonia, inhabitants of municipia were not automatically Roman citizens, but magistrates and their families did become citizens at the end of their time in office.

Only one municipium is known to have been established in Roman Britain, at Verulamium (St. Albans).

The levels of Roman cities - in descending order - are as follows:

Roman attractions in Britain (places to see tagged with 'Roman')