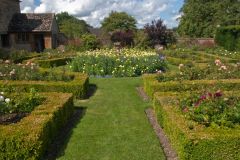 The manor house is set in a small, but very attractive mix of formal and informal gardens.
On the east side of the house is a knot garden, with low clipped hedges and a profusion of lavender. At the centre of the knot garden is a sundial which dates to 1579. Herbaceous borders line the front porch, which gives way to wide lawns decorated with topiary. From the front porch a straight path leads to a raised orchard with bee hives.

Further to the east of the house, beyond the knot garden, is a lovely herb garden. This is especially noteworthy, as separate areas of the garden feature herbs that were sent from britain to the Americas, and herbs which came from the Americas to Britain. There is also an area of culinary herbs and a further area of Medicinal herbs.

To the north side of the house is a small garden area called the Washington Garden, at one end of which is circular hedge enclosure with an exceptionally large bust of George Washington at its centre.

Beyond the orchard is a recreation of a village forge, complete with traditional blacksmith tools. Beyond this are several small garden areas which are well worth a look. There is an Elizabethan villagers garden, with plants that an ordinary villager would have planted during Tudor times. There is also an award-winning ‘Feast of Herbs’ garden which was granted a Silver medal at the Chelsea Flower Show in 2003.