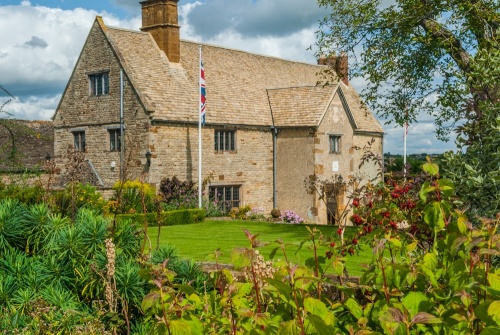 Sulgrave Manor is a comfortable Tudor manor house built in the mid-1500s by Lawrence Washington, a Northampton wool-trader and great-great-great-great-great grandfather of George Washington, first President of the United States. The manor fell into disrepair until a major restoration effort was undertaken in the early 20th century.

Sulgrave Manor is completely unique in that the property is owned equally by both Britain and the US, hence both flags fly in front of the house.

During the late medieval period, Sulgrave belonged to the Priory of St Andrew at Northampton. When the priory was dissolved by Henry VIII in 1539 the estate was purchased by Lawrence Washington, a wool merchant and former mayor of Northampton.

Washington's descendant, John Washington, emigrated to America in 1656, probably prompted by a dip in the royalist-leaning Washington family fortunes following the Civil War. John was the great-grandfather of George Washington.

Spare some time to stroll around Sulgrave village; its a very attractive rural village, with quite a few period cottages, several thatched, and of course there is the parish church of St James the Less. The church is located a five-minute stroll from the manor house and is well worth a visit. The west door is Saxon, but the major attraction for most visitors will be the Washington family pew in the south aisle.

Lawrence Washington and his second wife Amy are buried before the pew, and the site is marked with a modern memorial brass. The window overlooking the pew is set with four armourial crests bearing the Washington coat of arms at different periods. Just inside the south door of the church is a large iron-bound chest which may have belonged to Lawrence Washington, who was also responsible for building the south porch.

Garden: A sundial dating from 1579 graces the knot garden of the restored Tudor manor house. The extensive lavender beds are a notable feature of Sulgrave's garden, and The Herb Society maintains the National Herb Garden here. This herb garden features many of herbs that would have been grown in Tudor times. Read more about the gardens. 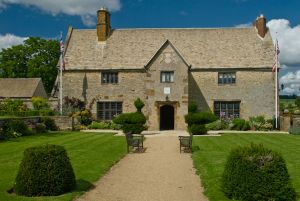 More self catering near Sulgrave Manor >>

The Granary at Fawsley - 7.2 miles
Daventry, Northamptonshire
Stay from: £50.00