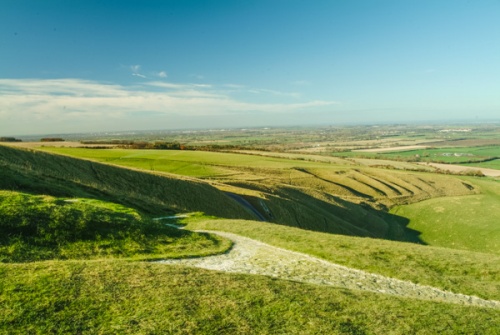 A mysterious White Horse is carved into the chalk hillside above the village of Uffington, Oxfordshire. Various interpretations of the stylised carvings are possible; some believe that it might be a dragon rather than a horse. The fact that it is terribly hard to see the whole figure from anywhere but up in the air has given rise to the somewhat less supportable theory that the carving was a signal to extraterrestrials.

We're not on firm ground when it comes to dating the White Horse, either. It was originally thought to be Celtic, or perhaps Iron Age. More recent tests have indicated a date closer to 1000BCE, during the Bronze Age.

Then we come to the most curious question of all - why was it built? Conjecture ranges from a tribal emblem, the equivalent of a modern flag, to a commemorative symbol of King Alfred's triumphs over the Danes. Or perhaps it was a Celtic symbol of the goddess Epona, whose job it was to protect horses.

About the only thing we do know for certain is that the horse - or figure - is 374 feet from end to end and that it was tended for many years by the villagers, who carefully eradicated any weeds that might have grown up in the chalk of the horse's outline. That task has now been taken over by English Heritage.

The shape of the White Horse

On the crown of the hill above the horse is the hill fort of Uffington Castle. Despite the name, the hill fort bears no resemblance to a medieval fortress, but rather resembles a large, fairly flat lawn fringed with low mounds of earth, long overgrown with grass.

Below the horse, the ground slopes away sharply in folds, forming a bowl in the hill, called The Manger. On this spot in centuries past the villagers held Cheese Rolls, a wild race whereby a round of cheese was rolled down the hill and participants chased after it. Due to the combination of the steep terrain and probable consumption of large amounts of alcohol on such occasions, broken limbs were not uncommon!

At the base of White Horse hill rises a small conical mound, a sort of mini-hill. This is St. George's Hill, or Dragon Hill, and legend holds that on this spot St George fought and defeated a dragon long ago.

The top of the hill is bare, and according to the myth, that is because the dragon blood spilt there made it impossible for grass to grow. You can climb onto the top of Dragon Hill via a set of steep steps. It is well worth the short ascent, as the view out over The Manger is very striking.

The ancient Ridgeway path runs along the crest of the hill, passing within feet of the hill fort. Just a short distance west along the Ridgeway path from the White Horse is Wayland's Smithy, which was originally a megalithic mortuary house, and later a chambered tomb fronted by an elaborate entrance.

The name "Wayland " refers to Wayland the Smith, the Scandinavian Wodin, and the story goes that if you leave your horse at the site along with a few pennies, the animal will be reshod when you return. 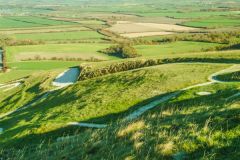 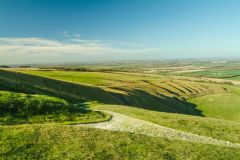 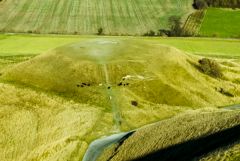 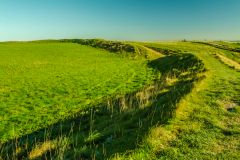 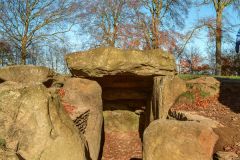 Related:
Vale of the White Horse

More self catering near Uffington

More bed and breakfasts near Uffington