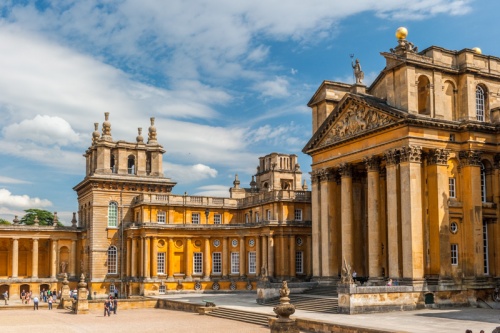 One of the great treasure houses of England, Blenheim Palace was a gift from a grateful Queen Anne to John Churchill, 1st Duke of Marlborough for his victory at the Battle of Blenheim in 1704. A descendant of the Duke was Winston Churchill, who was born in a small room near the grandiose main entry. An exhibit tells the story of Churchill's life and times.

The interiors are truly magnificent: one of the most ebullient expressions of the Baroque style in England. Designed by John Vanbrugh, and completed by Nicholas Hawksmoor, with grounds by Capability Brown. Take your time, there's a lot to take in.

When John Churchill, leader of the English forces in the War of the Spanish Succession, triumphed over the French at Blenheim, in modern Austria, he might have suspected that Queen Anne would offer him some kind of reward. 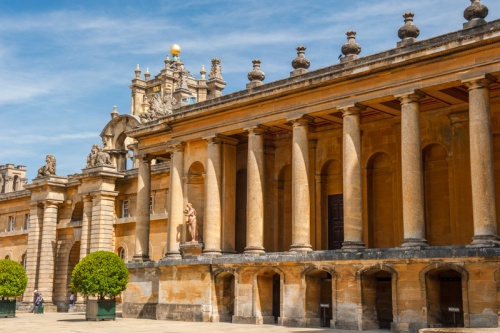 Surely he could not have foreseen just how generous the monarch would be. Churchill owed his good fortune to his wife Sarah, who was the queen's confident and best friend. Anne made Churchill the 1st Duke of Marlborough and had Blenheim Palace built for him on the former royal manor of Woodstock.

The monarch had Parliament grant £240,000 for the construction of Blenheim, a huge sum in those days. So influential was Marlborough, mainly through the considerable political machinations of his wife, that it was said he was effectively the ruler of the country.

The architect responsible for creating one of the finest stately homes of his or any other age was John Vanbrugh. It was a curious appointment, as Vanbrugh had limited architectural experience, but the results, though not to everyone's tastes, speak for themselves. The Duchess wanted Sir Christopher Wren to take charge of the project, but for once she did not get her way.

The Duke chanced to meet young playwright John Vanbrugh at a playhouse, and, it is said, was so impressed that he offered him the commission on the spot. There is more to the tale than this, for Vanbrugh had already begun the extravagant Castle Howard in Yorkshire, in conjunction with architect Nicholas Hawksmoor. Churchill probably knew of the work at Castle Howard and desired something equally extravagant at Blenheim.

In the park at Blenheim is Fair Rosamund's Well, the supposed site of a house built by Henry II for his mistress, Rosamund de Clifford. Several legends surround Rosamund. One claims that the king built his lover's bower at the centre of a maze, through which he alone knew the path. Another tale claims that Rosamund took her own life, but an alternative version tells that Henry's volatile queen, Eleanor of Aquitaine, poisoned her rival for the king's affections.

If that was the case, he got his wish, for Vanbrugh created a lavish building, supremely ornate and very military in bearing. The house was designed to be seen from afar, which may explain something of the immense size and bulk of the edifice, which seems quite overdone up close. 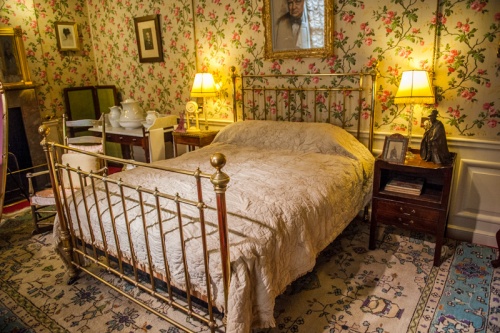 Work did not progress smoothly, however. Political factions in Parliament complained over the cost of the palace and the flamboyance of the design. Sarah Churchill, peeved that her favourite, Wren, had been bypassed for the commission, criticized Vanbrugh's work at every opportunity. Finally, she had Vanbrugh banned from the building site, though the architect snuck back in secret to view progress.

The work of completing Blenheim Palace was left to Nicholas Hawksmoor. When Blenheim was finally opened to the public in 1725 Vanbrugh and his wife attempted to view the palace but they were refused entry. So controversial was Vanbrugh's design that, far from making his name, he received few other commissions as an architect. 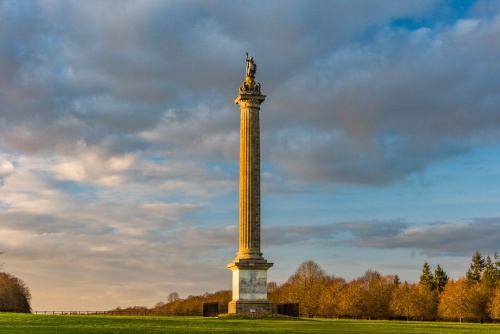 The Column of Victory in Blenheim Park

Long before that time Queen Anne had fallen out with Sarah Churchill and refused further money to pay for the palace construction. The Duke and Duchess were exiled, only to return the day after Anne died in 1714.

Blenheim is not to everyone's taste. Alexander Pope famously remarked after seeing Blenheim

'Thanks, sir, cried I, tis very fine,
but where do you sleep or where d'ye dine?
I find by all you have been telling,
that 'tis a house but not a dwelling'

To be fair to John Vanbrugh, he was handed a difficult commission; he was to design not just a house, but a memorial; a monument to Churchill from a grateful nation. Grand houses at that time were seldom designed with comfort in mind; they were designed to impress, even to overwhelm visitors. This vision carried through to the chapel. Here a gargantuan memorial, designed by William Kent, and sarcophagus to the Duke takes up much of the chapel wall. 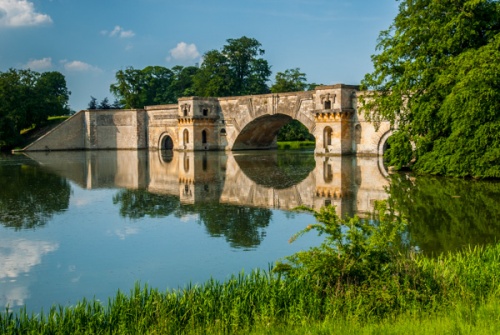 The original gardens at Blenheim, as designed by Vanbrugh, were typically grandiose. Vanbrugh dammed a small river to create three streams separated by islands, and across the whole built 'the finest bridge in Europe'. The gardens were relatively unchanged until the 4th Duke brought in Capability Brown to transform the formality of the gardens into the then-popular landscape garden style.

This Brown did, damming the River Glyme to create a huge lake, with cascades at each end, planting trees and creating undulating hills and viewpoints. Brown allowed the river to submerge the lower sections of Vanbrugh's bridge, softening the massive contours. He also planted the parterre and Great Court with grass. This latter work was later undone in the 20th century so that today visitors approach the palace entrance across an arid court of stone.

In 1984 Blenheim Palace was named a World Heritage site. 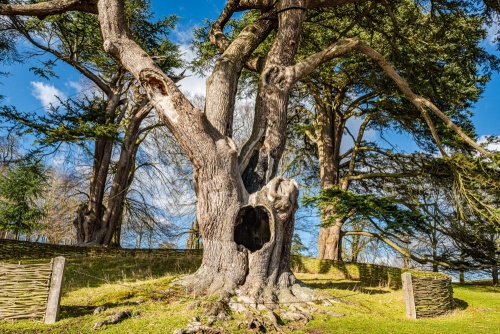 There's a lot to offer families visiting Blenheim, and the Pleasure Gardens have most of it; children love the hedge maze, and for older children, there is a giant chess set and a ground maze, plus pitch and putt and a miniature village. But the biggest hit of all for the younger generation is the miniature railway, which makes regular trips between the palace and the Pleasure Grounds. The park also allows plenty of space for picnics or running around.

An exhibit called ‘Blenheim Palace: the Untold Story’ recounts the erstwhile life of the palace as seen through the eyes of its servants, using animatronic figures and innovative film and projection technology.

Children and adults alike may also enjoy attending one of the many events hosted throughout the year in the Palace and grounds; check the Palace website for details of jousting, horse trials, craft fairs, or even the Blenheim Triathlon.

A short walk from the Palace, across the Grand Bridge, brings you to The Harry Potter Tree, a Cedar of Lebanon used as a setting for the 2007 film Harry Potter and the Order of the Phoenix. 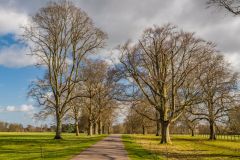 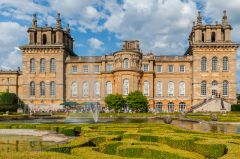 More self catering near Blenheim Palace

Self Catering near Woodstock