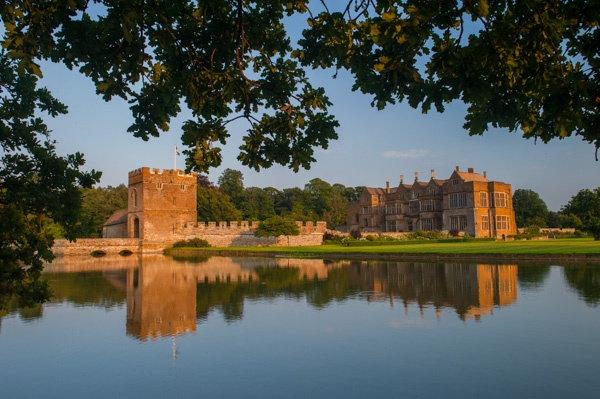 The family seat of the Fiennes family since 1377, Broughton Castle is a fortified manor house surrounded by a wide moat and set in idyllic parkland.

Broughton Castle was built by Sir John de Broughton in 1300 at this peaceful location where the confluence of three streams created a natural site for a moated manor. The house was sold in 1377 to William Wykeham, Bishop of Winchester and one of the most powerful men in medieval England. A subsequent Wykeham married into the Fiennes family, in whose hands the castle still rests.

The original house, of which much still remains, was remodelled extensively in 1554 and again in the 17th and 19th centuries. The original house was crenellated (battlements were added) by Sir Thomas Wykeham in 1406.

Beginning in 1550 Richard Fiennes transformed the medieval manor into the Tudor house that you see today. Sir Richard added the west wing, with the Great Parlour and the Oak Room. It was left to Sir Richard's son, also named Richard, to complete the Great Parlour with the addition of the quite wonderful plaster ceiling. 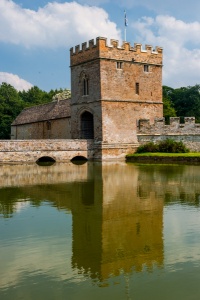 The Gatehouse and moat

The great drama in the history of Broughton Castle was to follow in the 17th century. Sir William Fiennes was one of the leading activists against Charles I. He allowed Broughton to be used as a meeting place for those plotting against the king, and later raised troops to fight against the king at the Battle of Edgehill in 1642.

The battle was lost, and Royalist troops later besieged the castle, overcoming the defenders and occupying the castle for a time.

Broughton fell into decay in the 19th century, but was eventually rescued from a descent into decrepitude by Frederick Fiennes, 16th Lord Saye and Sele, who brought in prominent Victorian architect Sir George Gilbert Scott to rescue Broughton.

Moviegoers will recognize Broughton Castle from the blockbuster film Shakespeare in Love (1998). It was also featured in The Madness of King George (1994), Three Men and a Little Lady (1990), and The Scarlet Pimpernel (1982). 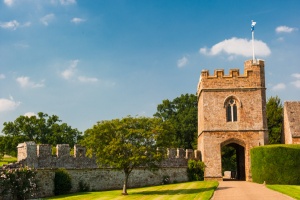 The Gatehouse and Moat

The castle is approached over a bridge across the moat and through the imposing crenellated Gatehouse, built in 1405 by Sir Thomas Wykeham. The moat itself is six feet deep and encircles an area of 3 acres. Pass through the gatehouse and enter the courtyard. To your left is the shop and tea room, and ahead across an expanse of lawn is the Tudor frontage of Broughton Castle.

The Great Hall incorporates the original hall built in 1300. Above the fireplace in the Great Hall is a portrait of William of Wykeham, copied from an original portrait of c 1400. About the hall are arranged suits of armour in high niches, while swords and guns, halberds, pikes, and other weapons (most medieval) from around the world hang upon the wall. The ceiling is ornately plastered with large pendants hanging down in 18th-century style. A passage beside the entry leads to ... 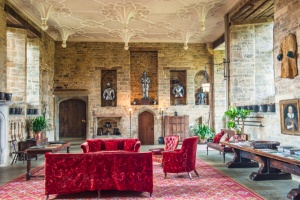 Superb "Double linen fold" panelling rings this rectangular chamber, which was originally the undercroft of the medieval house. To the left of the main window, the panelling has been carved into a depiction of Broughton Castle itself, beside the likenesses of two sheep, an indication of the source of the family's wealth.

From the Dining Room, the Groined Passage leads to stairs to the first floor. The passage is worth taking your time over, as it features some very fine medieval vaulting with fancifully carved corbel heads supporting the vaulting.

The stairs from the Groined Passage on the ground floor lead to the Long Gallery. This was a common feature in Tudor manor houses, being a place where you could exercise on days when the weather did not permit you to go outside. It was also a place to showcase family portraits and art objects. At one end of the Long Gallery is ...

So named because Queen Anne of Denmark, wife of James I, slept here in 1604. A contemporary portrait of the queen hangs above the fireplace. The four-poster bed is 18th century Hepplewhite, and the Chinese silk bed covers date from the same period.

A small hagioscope (window with space to kneel and observe the interior of a church) in the corner of the room looks down into the family chapel. The chapel was consecrated in 1337, and the tiles and the altar are also early 14th century. 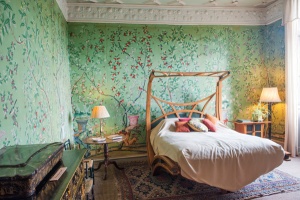 Two kings have stayed in this room; King James I in 1604 and Edward VII in 1901. Hand-painted 18th-century Chinese wallpaper graces the chamber as well as the small antechamber leading off the main room. The ornate fireplace is in the French style and dates to 1554. The richly carved stucco overmantle depicts a scene from the works of the Roman poet Ovid, with dryads dancing about an oak tree.

At the opposite end of the Long Gallery from Queen Anne's Room is the Great Parlour. The most striking feature of this room is the quite remarkable plastered ceiling. One end of the ceiling shows the date 1559, and the other has the initials of Richard and Elizabeth Fiennes. The wallpaper has been designed to resemble leather.

Family mementoes are dotted about the chamber, including a top hat given to Cecil Fiennes in 1859 for dismissing three batsmen with successive balls while playing cricket. This is one of the earliest known cases of a cricket "hat trick". 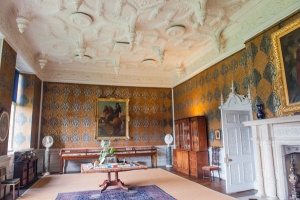 Used in the 1630s for secret meetings by William Fiennes and his friends plotting against King Charles I. Sir William was a founder of the Providence Island Company, whose avowed purpose was to encourage settlement in the Caribbean. Fiennes and his associates used the Providence Island Company as a cover for their illicit meeting to organize resistance against Charles I.

Fiennes and men like Pym, Hampden, Lord Warwick, Lord Brooke, and Sir Henry Vane met in what they called "the room that hath no ears", which is believed to be this chamber.

In the centre of the chamber is a small table upon which are several cannon balls. These were found in the moat in 1768 and are believed to have come from the siege of Broughton Castle by Royalist troops following the Battle of Edgehill in October 1642. The Royalists eventually forced the castle defenders to surrender.

Descend once more to the ground floor and the ... 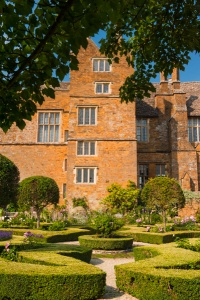 The Oak Room is built upon the foundations of the 14th-century kitchens. This chamber is named for the oak panelling that covers much of the wall area. The most notable aspect of the Oak Room is the ornate porch, a very unusual interior feature.

Above the porch is the Latin inscription 'Quod olim fuit meminisse minime iuvat' (there is no pleasure in the memory of the past). It seems likely that this inscription was added by William, the 8th Lord Saye and Sele, upon the restoration of the monarchy. Perhaps Sir William intended to draw a line under his family's past support for Parliament during the Civil War, and show appropriate gratitude to King Charles II for pardoning the family upon his return to the throne.

The gardens at Broughton are a lovely mix of formal and informal. The formal part is the Ladies Garden at the rear of the house, enclosed by low walls. This garden of low hedges and gravelled walks was built upon the site of the 16th-century kitchens. The roses are a particularly lovely aspect of this garden and are at their best in July.

The parish church of St Mary's stands only a few yards from the moat at Broughton Castle. It is well worth a visit, for the elaborate family tombs of the Wykeham and Fiennes family who are buried here, as well as the quite lovely medieval wall paintings. The latter, though reasonably well preserved, pale in splendour beside the richly painted tomb of Sir John de Broughton, founder of the castle (d. 1315). Sir John's tomb, on the south wall of the south aisle, is quite remarkable for its rich ornamentation.

Broughton Castle is an overlooked gem; it is hard to imagine a more perfect setting for a historic house. The lovely moat and the open fields beyond contrive to give Broughton an air of timeless beauty.

The gardens are small but probably the most profusely colourful I have seen at any more famous estate. The house is cheerfully informal, with an enjoyable mix of art and furnishings with family objects and memorabilia gleaned over the centuries. Broughton Castle gets two enthusiastic thumbs up from this writer!

More self catering near Broughton Castle