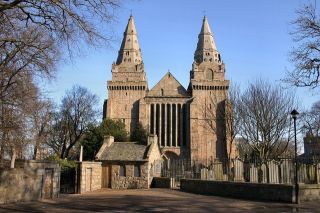 St Machar's Cathedral
Only the nave and transepts remain of the magnificent medieval church known as St Machar's Cathedral. The ruined transepts hold tombs of medieval bishops, and the church boasts a unique flat-vaulted wooden ceiling with heraldic panels, crafted in 1520.
History
St Machar was a companion of St Columba and established a church in Old Aberdeen around AD 580. According to a 14th-century account, God (or St Columba) told Machar to establish his church where a river bends in the shape of a bishop's crozier before entering the see. The River Don makes this shape near the present cathedral site. Was the story made up after the fact, suggested by the river's shape?

St Machar's church was rebuilt in 1131 in Norman style. Shortly after the rebuilding, King David I transferred the see of Mortlach to Aberdeen, making the church a cathedral.

Very little remains of the 12th-century cathedral church beyond a carved capital fragment. In the late 13th century Bishop Henry Cheyne began to enlarge the church in the form of a fortified kirk, with towers more reminiscent of fortified tower houses than church towers. Bishop Cheyne's work was interrupted by the upheaval of the Scottish Wars of Independence.

William Wallace's Arm
In 1305 William Wallace was executed in London, and his body cut into four quarters. Each quarter was sent to a different part of the country as a warning against rebellion. Wallace's left arm and torso were sent to Aberdeen, and according to legend were buried within the cathedral wall, though the cathedral's own website seems unsure whether this legend is true.

The 1520 heraldic
ceiling (c) Quicumque
In the late 14th century the cathedral was almost completely demolished by Bishop Alexander Kininmund II, who began building a new nave and west towers. Work continued on the nave, west front, and central tower into the late 15th century, and even in the early 16th century features like the heraldic ceiling and western spires were still being finished.

The Scottish Reformation hit St Machar's hard; it lost its status as a cathedral, the chancel was torn down, and lead stripped from the roof. The central tower collapsed during a storm in 1688, perhaps because the structure was weakened when Cromwell's army under General Monck robbed stones from the building to erect a fort in 1654.

The collapse destroyed the choir and transepts, leaving only the nave of the medieval church. The west end of the nave was blocked off, leaving the ruined east end to decay, and worship carried on in the former nave and aisles.

The church's cathedral status was restored following Charles II's Restoration in 1660, but it is a cathedral in name only, for it is part of the Church of Scotland, which, as a Presbyterian organisation, does not have cathedrals.

What to see
By far the most famous historical feature at St Machar's is the heraldic ceiling, built around 1520. This features brightly painted heraldic shields as bosses on a flat wooden ceiling. There are 48 panels, arranged in 3 rows of 16. The shields bear coats of arms of European monarchs and the most important bishops and earls of Scotland. Aside from its artistic beauty, its a fascinating piece of social history. Around the edge is a frieze listing bishops from 1131, and Scottish monarchs from Malcolm II to Mary, Queen of Scots.

There are a number of medieval bishop's tombs, protected by modern canopies from the weather. Among these are effigies of William de Deyn (1344–1350) and his successor as Bishop of Aberdeen, John de Rait (1350–1355). Look for a 7th century cross-slab from Seaton, and a 12th century cross-head.

It is remarkable to see the cathedral now, with its striking west towers and facade, and realise that we are only seeing a fraction of the original medieval and 16th century church.

Images are (c) as noted, republished with gratitude under a Creative Commons license