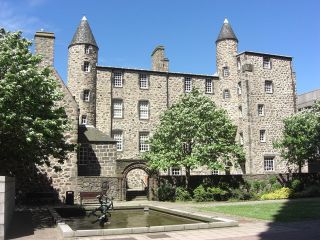 Though it bears the name of Lord Provost George Skene, this impressive 16th-century mansion was not built for the Provost. The first written record of the house comes from 1545, and it was later purchased by a prosperous merchant named Matthew Lumsden, who commissioned a series of religious paintings depicting the life of Christ.

Provost Skene purchased the house in the late 17th century and is thought to have commissioned the impressive plasterwork ceilings which are one of the highlights of a visit. When the Duke of Cumberland marched his armies north into the Highlands to meet Bonnie Prince Charlie's Jacobites at Culloden he commandeered the house for his soldiers. From this association, the house was known for many years as Cumberland's House.

By the 20th century, this area of Aberdeen had become very run down, and the house was used as a residence for the poor. A public campaign saved the house from becoming derelict, and it was refurbished and opened as a museum in 1953.

The interiors of the house have been furnished to represent different time periods in its history, with exhibits on the history and archaeology of Aberdeen. The Parlour, Bedroom, and Great Hall are furnished to show life in the 17th century, while the Dining Room and another Bedroom depict the 18th century. The Regency Parlour recreates the early 19th century. One room that has not been altered is the Painted Gallery, which houses the cycle of religious paintings commissioned by Lumsden. The Costume Gallery holds changing displays of period fashion.