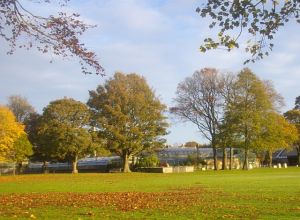 Duthie Park in Aberdeen dates to the late Victorian period and is home to a Winter Gardens that houses rare and unusual plants from around the world. Duthie is one of the most popular gardens in Britain.

In 1881 Lady Elizabeth Duthie of Ruthrieston purchased 44 acres of land on the banks of the River Dee for 30,000 pounds from the Arthurseat estate. She promptly donated the land to the local council to serve as a public park in memory of her brother and uncle. There was an obstacle in the way of creating a park; Sycamore Place street ran through the middle of the estate. The street and its houses were completely destroyed to make room for landscaping.

The design was laid out by William R McKelvie an architect and surveyor from Dundee. The first piece of sod was turned by the Earl of Aberdeen and Lady Duthie in a ceremony on 27 August 1881. The silver spade used in the ceremony is on display in the Winter Gardens.

The park officially opened just over 2 years later on 27 September 1883. The city had hoped that Queen Victoria would perform the honours, but she was recovering from an accident so the ceremony was performed by her daughter, Princess Beatrice.

In 1899 a greenhouse was erected within the parkland to house exotic and rare species of plants. This is the David Welch Winter Gardens, home to the second-largest collections of giant cacti and bromeliads in Britain (after only the Eden Project in Cornwall).

The original Palm House was designed by Mr Rust and used a frame of redwood brought from St Petersburg. The greenhouses cost 1,550 pounds and stretched 108 feet long under a dome rising 46 feet.

The original Victorian greenhouse was badly damaged by storms in 1969 and had to be replaced. They now house unusual species such as banana trees, Spanish moss, and tree ferns. There have been several extensions to the greenhouses, including a 'corridor of perfumes', fern house, and a Temperate House. The Winter Gardens were renamed in honour of a Director of Parks for Aberdeen, who died in 2001.

Other highlights include an Arid House, with a collection of cacti from around the world, a Floral Courtyard, with commemorative roses planted for the Burma Star Association, and the Tropical House, where you will find plants from South America, including orchids and Ginger plants.

Near the Winter Garden is a Japanese garden, designed as a memorial to the people of Nagasaki and Hiroshima in WWII.

Another feature within the park is a series of metal bridge railings, salvaged from a bridge on Union Street when it was redeveloped in the middle of the 20th century. The railings are decorated with cats, derived from the Aberdeen coat of arms. 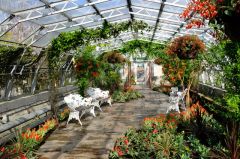 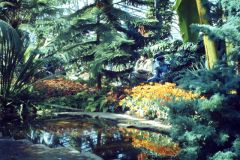 More self catering near Duthie Park and Winter Gardens >>

More bed and breakfasts near Duthie Park and Winter Gardens >>