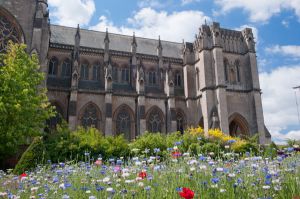 A Victorian Gothic (Catholic) cathedral in French Gothic style, immediately beside Arundel Castle. The Cathedral was begun by Henry, 15th Duke of Norfolk, in 1868, to serve as a Catholic parish church for Arundel. It was completed in 1873.
The Duke employed as his architect Joseph Hansom, inventor of the Hansom cab. While this might seem an odd choice, Hansom carried out his brief brilliantly, creating a soaring church faced with Bath stone.

The Duke wanted a church to rival his own magnificent castle, and Hansom obliged, creating one of the finest examples of Gothic Revival style in England, with slender clusters of pillars rising to beautifully vaulted ceilings soaring high overhead.

The original design called for a spire over the north porch, but this idea was never carried out, leaving the church with a rather peculiar outline. The most striking feature of the cathedral is the west front, with a huge rose window filled with colourful stained glass.

St Philip Howard
The cathedral was originally dedicated to St Philip Neri, then in 1965 this was extended to Our Lady and St Philip when the church was raised to cathedral status, and finally, in 1973 the recently canonised St Philip Howard was added to the dedication. Howard was the 20th Earl of Arundel, a Catholic recusant who was imprisoned in the Tower of London by Elizabeth I and died of dysentery there in 1595.

He was buried first at the Tower, then reburied in the Fitzalan Chapel in the castle grounds. Finally, in 1971 he was reburied again, inside the cathedral, where you can see his memorial, with a sculpture of his faithful dog, who kept him company throughout his decade-long stay in the Tower.

More self catering near Arundel Cathedral >>