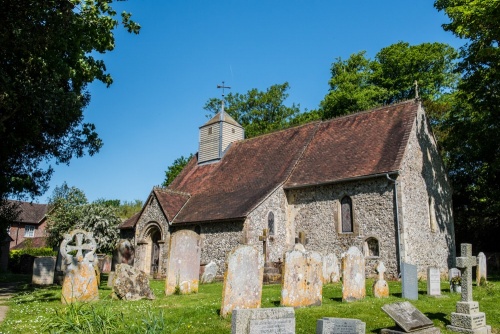 A delightful little rural church, built for the lay tenants of Tortington Priory. The church dates to the 12th century and retains some very nice Norman features, including a beautifully carved Norman doorway.

We do not know exactly when the church was built but we can narrow down the date range considerably. The church was not mentioned in the Domesday Book of 1086, but existed by 1150 when it is mentioned in a surviving document. So sometime between 1086 and 1150, the church was erected by the monks of Tortington.

Tortington Priory was founded by Hadwissa Corbett in the 12th century as a house of Augustinian canons. Interestingly, Tortington appears to have been used as a place where troublesome canons were sent - a sort of house of monastic correction! In 1380 the Priory gained the right to appoint clergy to St Mary Magdalene.

The nave and chancel arch have been dated to around 1140. A south aisle and chapel were added in the 13th century and subsequently pulled down. A Victorian restoration built a new south aisle and re-sited the beautifully carved south doorway for the second time. The 13th-century chapel was not rebuilt but you can still see an aumbry, or stone cupboard built to house sacramental vessels, in the exterior wall. 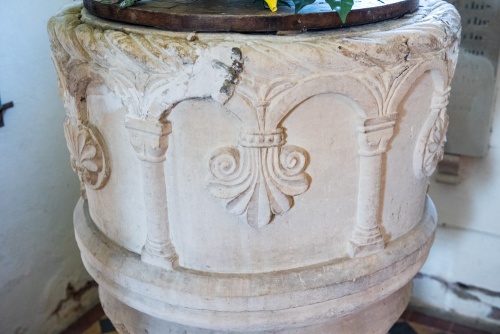 Over the west gable is a small weatherboarded 16th-century bellcote. It holds two bells, one Victorian and the other medieval. The medieval bell is inscribed with the Latin phrase 's thomas treherne', suggesting that this bell was salvaged from Tortington Priory when it was suppressed by Henry VIII. The inscription might also point to the church being originally dedicated to St Thomas rather than St Mary Magdalene.

You enter the church through the beautiful Norman doorway, built of Caen stone and carved with traditional Norman chevrons One order of chevrons is decorated with what appear to be grapes. Despite being exposed to the elements for some 800 years the carving is remarkably crisp and clean.

The interior features a highly decorated Norman chancel arch, replete with likenesses of fearsome birds and grimacing faces. On the west face are more beakhead carvings, one resembling a rabbit, others decorated with foliage, feathers, and tentacles. The arch keystone is carved with the inscription 'WF Leeves 1750' on the east face and bears the Leeves family coat of arms on the west face. Presumably, the Leeves family paid for repairs to the arch in 1750. 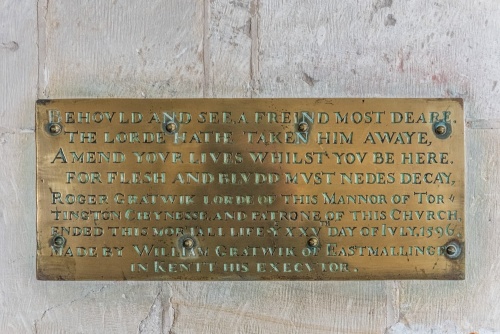 The font is of 12th-century date, again highly carved with decorative motifs. It was apparently broken in two at some point and then re-joined again. Like the south doorway, the font is made of hard-wearing Caen stone.

The south nave arcade is 13th century and leads to a south aisle added at that time. The crown-posts supporting the nave roof may also be 13th-century survivors. There is a 15th-century bench in the south aisle and a simple Jacobean pulpit.

Over the chancel arch are a pair of 18th-century funeral hatchments to members of the Leeves family. Set into the north side of the chancel arch is a simple brass plaque to Roger Gratwick, Lord of the manor of Tortington, who died in 1596.

The most modern touch in the church are colourful stained glass windows made by the popular Kempe studio around 1896. Look for Kempe's trademark wheatsheaf symbol incorporated into the window depicting St Richard in the north wall. The large east window holds glass by another famous Victorian artist, Thomas Willement, and dates to 1836.

St Mary Magdalene is no longer used for regular worship and is in the care of the Churches Conservation Trust. It is an extremely attractive country church in a wonderful setting. 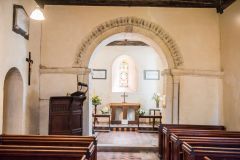 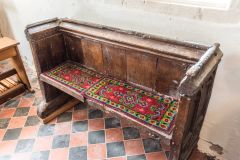