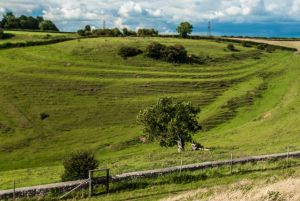 Dyrham Camp Hillfort
Otherwise known as Hinton Hillfort, this Iron Age fortification is the traditional site of the Battle of Dyrham in AD 577. Below the ditches and banks defining the fort are ancient terraces built for farming.

The Battle of Dyrham

The Battle of Deorham (Dyrham) was a decisive meeting between the armies of Wessex and the native Britons. According to the Anglo Saxon Chronicle, the Saxons led by 'Cuthwine and Ceawlin fought against the Britons and slew three kings, Coinmail, Condidan, and Farimail at the place which is called Dyrham; and they captured three cities, Gloucester, Cirencester and Bath'.

As a result of the Wessex victory, the kingdom of Dumnonia - present-day Cornwall and Devon - was permanently lost to the Britons of Wales. The consequences of this loss cannot be overstated in terms of the cultural development of Britain. The ancient cultural and linguistic links between the British tribes of the West Country and those of Wales were severed and each became more isolated as a result.

Though the site of the battle is not known for certain, it was likely at Dyrham Camp. What is very clear, however, is the spectacular location of the hillfort, with wonderful views towards Wales.

The hillfort takes up the summit of a spur of the Cotswold Hills, facing west towards Wales. The hilltop describes a rough triangle, with a footpath running across the southern edge. The southern slopes are rather steep, and here you can clearly see the remains of terracing that was part of ancient field systems. There is a large ditch and bank across the eastern edge of the site, with the ditch reaching 10 metres across and 2 feet deep.

On the inside edge is a bank up to 4 metres high. The interior of the enclosed area measures about 310 metres long and 229 metres wide. Only limited excavation has been carried out on the site, and no significant finds have been unearthed, so in truth, the fort is most significant as the potential site of a pivotal battle in British history.

The minor road to Hinton runs directly through the hillfort, but if you don't want to explore the site on foot perhaps a better place to view the fort and take in the entire layout of the site is from the National Trust property of Dyrham Park. Beside the hillfort are remnants of medieval strip lynchets, also best seen from Dyrham Park. 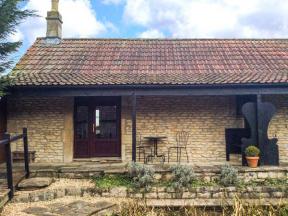 This studio cottage in the Gloucestershire village of Hinton sleeps two people.
Sleeps 2 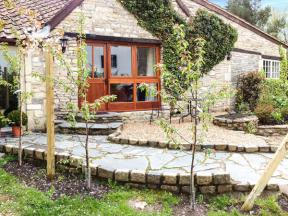 This single-storey, semi-detached cottage in Hinton sleeps two people in one bedroom.
Sleeps 2