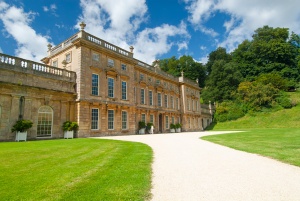 Dyrham Park is a magnificent late 17th-century stately home, begun in 1692 on older foundations by William Blathwayte, Secretary of State to William III. Dyrham is an odd mix of French and Italianate styles with a large hall bestrewn with portraits. Wood panelling, a state bed, and an extensive collection of Dutch paintings and furnishings complete this classic English country house.

Dyrham was designed in two stages on the remains of a Tudor house. The first stage, designed by Samuel Hauduroy in French style, is best seen on the west front, facing the garden. Here the effect is understated, with two stories, and a central balcony.

But Blathwayte's career was in the ascendancy, and by 1698 he could afford to hire William Talman, assistant to Sir Christopher Wren, to design the east front. Talman's work is reminiscent of an Italian palace, with a rusticated lower floor supporting two further stories, and a piano nobile on the first floor.

Blathwayte was much taken with Dutch art and style, and had the wherewithal to indulge in his passion. Dyrham became a showcase for Dutch decorative arts, including furniture, paintings, and delftware. The interior rooms are arranged around a high hall, the only remaining part of the original Tudor house. The panelling of the rooms is superb; a mix of lustrous walnut and cedar, with painted panels. 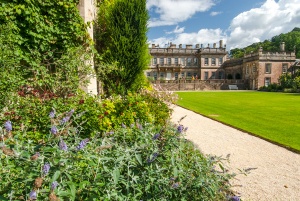 The Park and Gardens

The extensive formal gardens laid out at the time Dyrham was built must have been quite remarkable; excavations have shown traces of striking water features, including fountains, a canal, and a jet rising 20 feet above a mound in front of the house. There was also a cascade comprising 224 separate steps, said to be second only to that at Chatsworth House.

However, styles change, and by the late 18th century these formal garden features were no longer considered the height of fashion; the gardens were made over in the more informal style then prevalent, and many of the water features filled in. Humphrey Repton and Charles Masters laid out a new park, comprising gentle vistas and groupings of trees and shrubs.

The area around Dyrham Park shows traces of Iron Age or Roman field systems, and there are remains of a hill fort at Hinton, just to the north of Dyrham. You can get a very good view of the hillfort from the walk around the Dyrham estate boundary - it's really fascinating. Dyrham Park was used as the setting for the film Remains of the Day.

We visited as a family group, with two young children. Our kids had a great time, and so did the adults. I was especially struck by the wonderful church beside the house, with its medieval tiles and tombs of former lords of the manor.

The interiors of Dyrham are marvellous, and there are extremely enjoyable walks around the estate.

As someone who enjoyed Remains of the Day enormously, I couldn't shake the expectation that at any moment I would see Anthony Hopkins' character step into view. 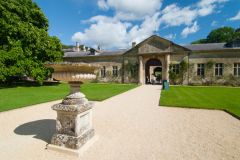 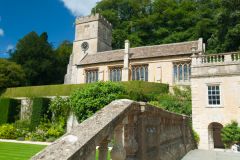 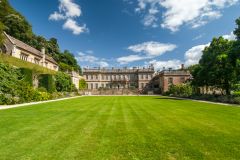 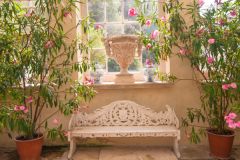 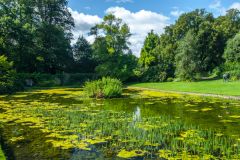 More self catering near Dyrham Park