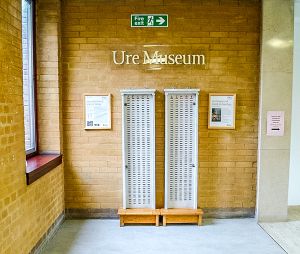 Part of the University of Reading Classics Department, the Ure Museum houses one of the largest collections of Greek and Roman artefacts in Britain, with an emphasis on Greek and Etruscan ceramics and terracottas.

The museum owes its origins to Percy Ure, the first Professor of Classics at Reading University, and his wife, Dr Annie Ure, acted as the museum's first curator. The original museum included a sizeable donation of Egyptian artefacts by Mrs Flinders Petrie, wife of the famous archaeologist. The museum has grown with several later donations of artefacts, and now holds the fourth largest collection of Greek ceramics in the country. The museum opened in 1922.

The museum also hosts a collection of Egyptian antiquities spanning the period from Pre-dynastic to the Roman era. Among the most memorable objects on display are a mummified cat's head, a funerary boat, musical instruments, plus copper and bronze jewellery.

Other collections include metal and stone objects from Greece and Rome, as well as examples of prehistoric pottery. There are objects from everyday life, grave goods, and a mask representing Medusa. Look for the bottles of oil worn by athletes around their wrists, and a statue of Aphrodite and Eros from a temple in Cyrene (North Africa).

The collections are organised by themes, including Myth and Religion, education, citizenship, warfare, household, and death. One interesting display is a timeline of Greek pottery, showing where the pottery on show in the museum was found, when it was made, and how it was made over time. Learn how to identify which time period each style of pottery came from, and identify the area it was made.

The museum is based in the Whiteknights campus of the University of Reading. It is free to enter and the museum is open Monday-Friday.

More self catering near Ure Museum of Greek Archaeology >>

More bed and breakfasts near Ure Museum of Greek Archaeology >>