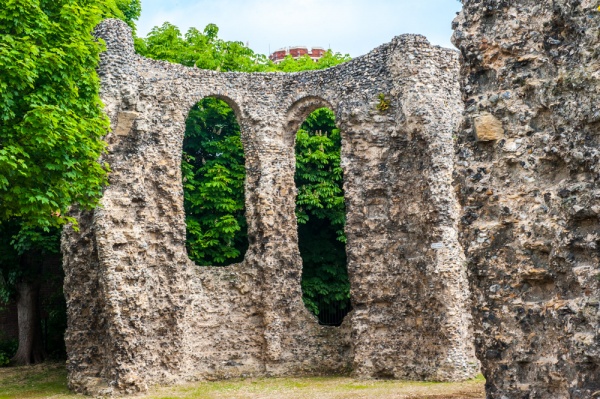 Reading Abbey was founded in 1121 by Henry I, and the royal patronage helped make the abbey one of the wealthiest and most important monasteries in northern Europe, a centre of scholarship and political influence. Henry desired the new abbey to be a daughter house of Cluny, and the monks were Cluniac, serving under a French abbot, Hugh of Amiens, who would later become Archbishop of Rouen, Henry's capital in France.

Reading Abbey was built in grand style, echoing the abbey of Cluny, supported on massive piers. One of the abbey church piers remains in Forbury Gardens. The cloister walk was an elaborate structure, with column capitals decorated with intricate carvings of monsters and beak head designs. Several pieces of beautifully carved stonework are on display at Reading Museum.

One capital carving, in particular, is famous among art historians; it shows a 'Coronation of the Virgin' (Mary being crowned Queen of Heaven) and is the earliest known example of this popular medieval theme. It seems clear that the Coronation of the Virgin imagery began at Reading and spread quickly throughout Europe, probably through Hugh of Amiens' continental contacts. 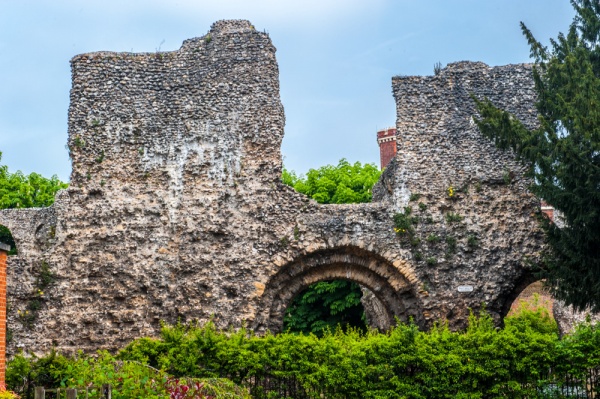 The Death of a King

Henry had his spiritual welfare in mind when founding Reading Abbey; he intended to be buried in the monk's choir, so that they could pray for his soul daily. But even kings cannot arrange to the date and place of their death; in December 1135 Henry was on a hunting expedition in Normandy when, against his doctor's advice, he ate a dish of lamprey eels and died.

His closest advisors were faced with a quandary; how to preserve the king's body while it was transported across the Channel to England and then on to Reading Abbey. There was no guarantee that there would be favourable winds for a crossing, so it might be weeks before the king could be properly buried.

Their solution was to remove the dead king's vital organs and anything that might putrefy. Henry's entrails, brain, and eyes were removed and buried at the priory of Notre Dame du Pre, near Rouen. One contemporary chronicler claimed that the king's brain emitted such noxious fumes that man who was charged with cutting off the king's head died after inhaling the poisonous vapours.

The remainder of Henry's body was embalmed, and laid in the Abbey of St Stephen in Caen until the seas were calm enough to permit a Channel crossing. Henry's preserved body was carried to Reading Abbey, sewn into a bull's hide, and buried before the high altar according to his wishes. Henry's wife, Queen Adeliza of Louvain, was present at the burial and she herself was buried in the abbey in 1151 (though some sources claim she was interred at the monastery of Afflighem in Flanders. 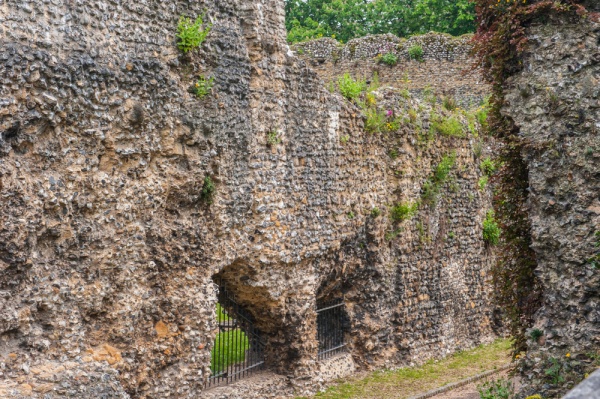 The abbey church was still under construction at that time, and it was not consecrated until 1164, when Thomas Becket, Archbishop of Canterbury, performed the ceremony.

After Henry's death, England descended into a Civil War between supporters of his daughter Maud, or Matilda, and his nephew Stephen of Blois, who also claimed the throne. King Stephen built a castle mound within the abbey grounds. The remains of this castle can still be seen in Forbury Gardens.

The abbey's wealth and status helped make Reading the largest and most prosperous town in the Thames Valley.

But even that status could not save the abbey from Henry VIII's Dissolution of the Monasteries. The abbey was suppressed in 1539 and the last abbot and a pair of his monks were executed for the ostensible crime of treason in front of the abbey gates. The monastic buildings were pulled down and the stone used for building projects. In the ensuing mayhem the exact location of Henry I's tomb was lost, and what exactly became of the dead king's burial site is a question that has vexed historians for centuries.

The former abbey precinct became known as the Abbey Quarter, and there are partial remains of the once-impressive monastery scattered throughout the Quarter. 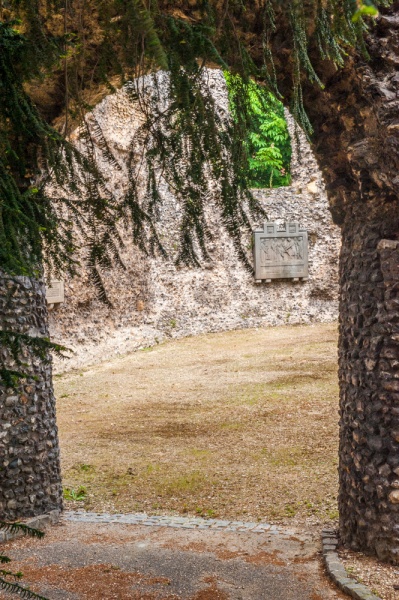 Looking into the chapter house

Only a few monastic buildings survived, including the Abbot's House, which was used as a royal residence until 1642. During the Civil War the abbey's boundary wall was fortified and trenches dug across what is now Forbury Gardens. The remains of the church nave were blown up. Following Parliament's victory in the Civil War King Charles I was briefly held at Reading before being taken to London for his trial and execution.

Following the Civil War the abbey grounds were used for building private dwellings and gardens. The Reading Corporation attempted to preserve what remained of the Abbey site by buying up Forbury and the abbey ruins and laying out a public park on the site.

The abbey remains give little clue as to the original size and wealth of this great monastic site. The best-preserved sections are transept arches of two chapels, the chapter house, the refectory wall, and parts of the dormitory.

It is fascinating to tour the Abbey quarter and discover parts of the medieval buildings incorporated into later buildings.

One historic building directly connected to Reading Abbey is the church of St Laurence, begun in 1121 outside the abbey's west gate by the Abbot of Reading to serve as a parish church for the townsfolk. Near the church is The Hospitium of St John, established in 1189 as a guesthouse for pilgrims and abbey guests.

Another church connected to the abbey is St James, off Forbury Road. The church was designed by AW Pugin, architect of the Palace of Westminster, in 1840. The presbytery and church school are located where the abbey church's crossing and north transept one stood. The church font is made from a column capital found when excavating foundation trenches to build the new church. You can also see exposed foundations of the transepts. 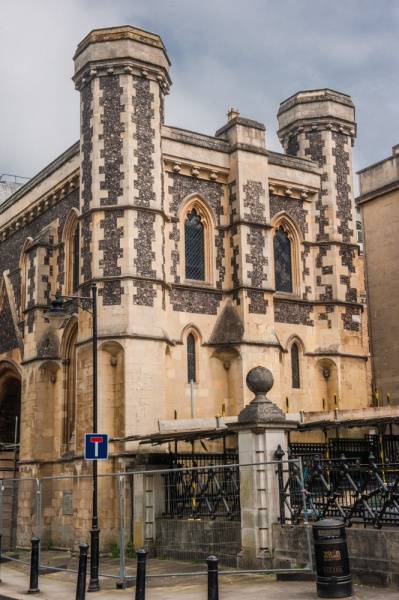 The Search for Henry I

St James Church hit the headlines in 2016 when an archaeological project was launched to locate the site of Henry I's tomb. Ground-penetrating radar is being used to scan the land surrounding the church in an attempt to locate the altar area of the abbey church, where Henry is believed to have been buried. More survey work will be carried out on the Reading Gaol car park and Forbury Gardens in an attempt to discover the exact layout of the abbey church and its outlying buildings.

On Abbey Street is what remains of the Inner Gateway, the boundary between the public areas of the abbey grounds and the monk's areas. During the 18th century, the Inner Gateway was used as a school for girls. One pupil was novelist Jane Austen. The gateway suffered storm damage in 1861 and was rebuilt by famed Victorian architect Sir George Gilbert Scott.

The abbey ruins were closed to visitors in 2009 when the crumbling walls became unsafe. A lengthy restoration process has stabilised the remains, which are due to reopen to the public in 2018. In the meantime it is perfectly easy to see most the remains, you just can't walk through the middle of the site. 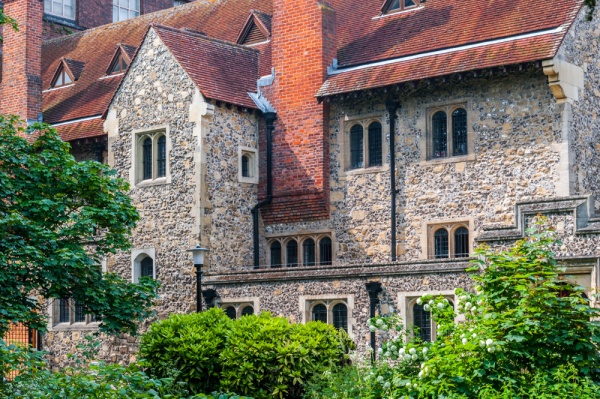 The Hospitium of St John

More self catering near Reading Abbey