HERITAGE HIGHLIGHTS:   Saxon carvings built into the current church are a reminder of St Andrew's ancient past 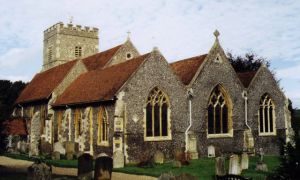 Sonning, St Andrew's Church
The first church at Sonning is said to have been founded by Birinus, the 7th-century monk who was the first Bishop of Dorchester Abbey. We are on firmer historical ground in the late Saxon period, when we know there was a minster church here.

A bishop's palace was built nearby, beside Holme Park manor house. The palace was used by the Bishops of Salisbury, as the Cathedral owned estates at Sonning, the bishops were keen to promote this ancient site as a destination for pilgrims.

The current church is a large 11th-century building, heavily rebuilt in 1852. There is a 10th century carved panel built into the western buttress of the north aisle. There are some excellent memorial brasses in the chancel floor. Among these, the oldest is that of Laurence Fyton (d. 1434), and there are several Elizabethan brasses as well, most to the local Barker family, whose vault lies under the chancel.

There are some very fine 17th century monuments to Lady Anne Clarke (d. 1653) and a marble memorial to Sir Thomas Rich (d. 1667). The latter can be viewed through a grill beneath the tower.

The organ stands on the site of the medieval chapel of St Siric (or Sarik or St. Cyriacus), which used to house relics of the saint. The chapel was a place of pilgrimage during the Middle Ages, but all that remains is the superb 15th century arch in the north wall of the chancel.

The historic interest does not stop with the churchyard boundaries. Near St Andrew's stands the Bull Inn, which began as lodging for pilgrims coming to St Siric's Chapel.

Another historic building near the church is Deanery Garden, one of the finest examples of Sir Edwin Lutyens early 20th-century country houses. The name comes from the fact that the house stands above the site of a residence used by the medieval deans of Salisbury Cathedral when they visited Sonning.