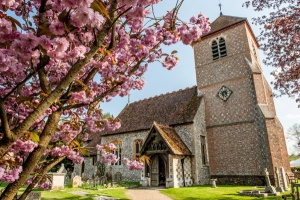 This lovely brick and flint church stands immediately beside the atmospheric Elizabethan manor of Mapledurham House, but there has been a church here at least as early as the 11th century.

There was a Norman manor here, with a private chapel for the Gurney lords. At som,e point that family chapel developed into a full-fledged parish church for the people of Mapledurham. The oldest part of the current building is a section of 13th-century stonework in the south wall, but most of the remainder dates from the 14th and 15th centuries.

The south aisle is 14th century, known as the Bardolf Aisle after the lords of the manor at that time. It originally served as a family chantry chapel, and is still owned by the Eyston owners of the manor house today and is not technically a part of the parish church.

In 1440 the parish was given by Henry VI to help fund his new foundation of Eton College, and the church has maintained close links to Eton ever since. Many Mapledurham vicars have held posts at Eton, and the prize piece of church plate, the Savill flagon (1598) is held at Eton. 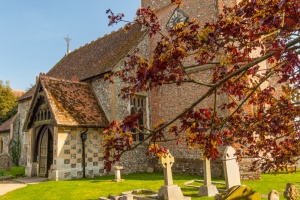 One of the most famous vicars of Mapledurham was Lord Augustus FitzClarence, the illegitimate son of William IV and his mistress, Dorothea Jordan. It is rumoured that the resident vicar was made Bishop of Chester so that the post of vicar at Mapledurham could be filled by Lord Augustus!

FitzClarence also served as chaplain to Queen Adelaide after William ascended to the throne in 1832. Mindful of his association with the parish, the king was open-handed with gifts to the church; look for the initials WR on the church clock in the tower. He helped found a village school, enlarge the vicarage, and give a silver communion plate to the church.

Another vicar from a well-known family was Edward Coleridge, nephew of the poet Samuel Taylor Coleridge. Edward Coleridge was involved with the Tractarian Society, and called in another member, architect William Butterfield, to renovate St Margaret's.

Butterfield was one of the leading architects in Victorian England, a specialist in High Anglican style. He raised the roof, rebuilt the tower, and added the north porch by which we enter today.

Note: Some maps show a direct river crossing at Mapledurham, but that simply isn't true; there is no crossing, and you have to follow signs for Mapledurham House from the Oxfordshire side of the river. 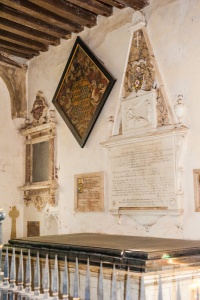 The south aisle, completely closed off from the main body of the church, is named for Sir Rober Bardolf, who was lord of Mapledurham from 1375-1395. The Bardolf Aisle is the private property of the owners of Mapledurham House and is only used for burials, not for any public services.

This arrangement is quite unusual, as the owners have been Catholic for over five centuries, so that we have a Catholic aisle within an Anglican parish church! The walls of the Bardolf Aisle are covered with numerous memorials to past lords of the manor and their families, most notably the Blounts.

By far the most prominent tomb is that of Sir Richard Blount and his wife Cecily (nee Baker). The effigies are quite beautifully carved. One interesting detail I've never seen elsewhere is that Sir Richard's hands are shown, not in the traditional palm to palm attitude of prayer, but clasped one around the other, as if he is holding his hands tightly together. Hardly an artistic revelation, but noticeably unusual.

The oldest feature inside the church is the simple Norman tub font, which is older than the current building, suggesting an earlier church on the site. The exterior of the tub is carved with raised rope decoration and traces of red and gold paint are quite obvious.

Fragments of medieval glass are gathered together in the east window, above the reredos of Sienna stone installed by William Butterfield.

St Margaret's is a lovely church, and the setting beside the Elizabethan manor and the estate cottages, looking across to the Thames, is simply wonderful. The church is usually open daily and even has a flask of coffee available for visitors to enjoy! 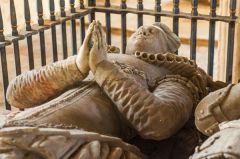 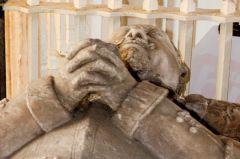 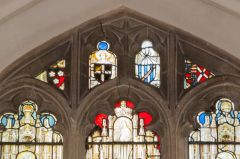 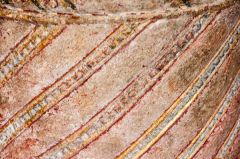 More self catering near Mapledurham

More bed and breakfasts near Mapledurham