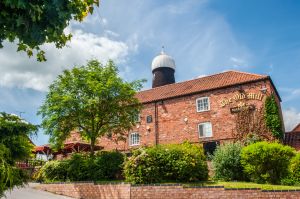 An attractive market town on the banks of the Humber River in northern Lincolnshire, at the southern end of the Humber Bridge. Barton boasts an exceptional range of historic buildings, a testament to the long history of the town, which dates back well into the Saxon period. Numerous Saxon finds have been unearthed in the area.

The most interesting building in Barton is the church of St Peter, a real Saxon gem, with lovely rounded and triangular arcading in the tower. One of the great Saxon churches of England, St Peter's is best known for its burials. Over 2800 skeletons were recovered from the burial vaults here, making Barton's first church one of the best sources of information on death and burial practice in Britain from the Saxon to the Victorian periods.

The church is operated by English Heritage and has limited opening times, but it is well worth timing a visit for when the church is open. The west tower is a gem, with traditional Saxon architectural motifs, and the interior boasts some excellent carved capitals and an extremely impressive chancel arch.

St Peter's church gets most of the publicity, but there's another historic church in Barton, and it is well worth a visit. St Mary's was built in the 12th century, which makes it a relative newcomer compared to St Peter's, but it is still one of the most interesting and important historic buildings in the county. Highlights include the ornately decorated west doorway, the superb arcades, and the huge tower arch. The east window is thought to be inspired by the great east window of Lincoln Cathedral. 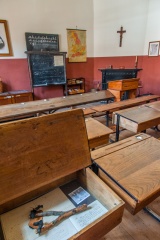 Thought to be the oldest dwelling in north Lincolnshire, this front part of the house was erected around AD 1325 and extended to create a timber-framed hall in 1425. In 1900 the property was divided into 3 houses, and 51 became a barber shop.

Today the property is run by a local charity group, and visitors can see the unaltered interiors as they looked in 1900. The front room is portrayed as a tobacconist shop and barber shop, with passages leading to the kitchen, scullery, and upstairs to a front room and bedroom.

Just a short walk from the town centre. off Caistor Road, is the Baysgarth Museum, housed in the former Baysgarth House and set in a beautifully landscaped 30-acre park. The attractive brick house was built for the Wright-Taylor family and is now operated by a local charity as a heritage museum.

On Maltkin Road is the Ropewalk Museum, housed in a former 18th-century ropery, or factory for making rope.

On Queen Street is an unobtrusive Victorian building in yellow brick. The subdued exterior belies the importance of te school, founded in 1844 by Samuel Wilderspin, whose revolutionary ideas on education would change Britain forever. See the restored schoolroom and play area, and get an eye-opening glimpse into the world of 19th-century education.

One of the most popular gathering places in Barton is The Old Mill, an attractive inn that takes its name from the old windmill standing in the inn yard. The mill dates to 1803 and was originally built to grind chalk and barley.

When it was converted into a pub in 1900 a Saxon burial ground was discovered and finds from the excavation, including swords and jewels, can be seen in the Baysgarth Museum. Close by is another popular pub, the Volunteer Arms, easily recognised by the image of an 18th-century redcoat soldier on the inn sign.

Almost in the shadow of St Peter's church is an attractive whitewashed building set back from the road. A small, easily-missed plaque by the drive tells us that it was here in 1911 that Chad Varah, founder of the Samaritans movement, was born.

Just a short distance outside Barton, yet seemingly lost in a time-warp, stands Thornton Abbey, famous for its huge medieval fortified gatehouse.

The long-distance path known as the Viking way begins here and runs south to Rutland. 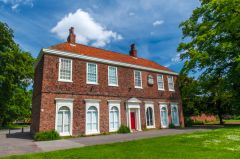 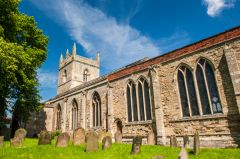 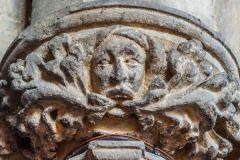 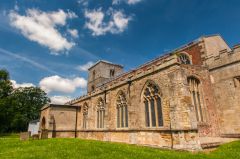 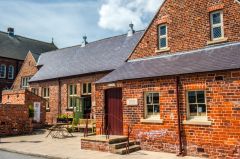 Nearest Accommodation to Barton upon Humber:

More self catering near Barton upon Humber >>

More Hotels near Barton upon Humber >>

More bed and breakfasts near Barton upon Humber >>