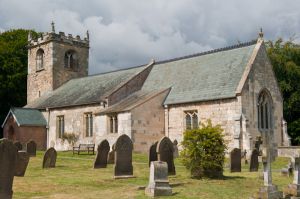 St Peter's church stands in the grounds of Rowley Manor, now a country house hotel. There was a church here at the time of the Domesday Book in 1086, but even then it seems there was no village of Rowley; the location was simply chosen as expedient because it was midway between Little Weighton and Riplington!

The church is Early English, though much that look is due to a heavy dose of Victorian restoration. The Victorians left us the 13th-century nave arcades and south doorway, though the doorway corbel heads are 19th century.

The font is also 13th century, though it was originally at St Nicholas church in Beverley. It was found in a stonemason's yard in Beverley by Reverend Robert Croft in 1800 and purchased for Rowley church.

Perhaps the most interesting historic feature of St Peter's is the Ellerker Chapel, This dates from 1730 and contains a wonderful series of memorial tablets to the Ellerkers of Risley. Tablets span over 4 centuries from 1401 to 1804!

Also in the Ellerker Chapel is a stained glass window commemorating the link between Rowley and the village of that same name in America. In 1638 the rector of Rowley was Rev Ezekiel Rogers. Rogers became disenchanted with the English church and turned to Puritanism.

He was suspended by Archbishop Laud and responded by gathering together a flock of some 30 families from the area and taking ship with them to Massachusetts colony in America. There he founded a new village called Rowley.

In 1994 the American Rowley donated a stained glass window in honour of Rogers and his flock.