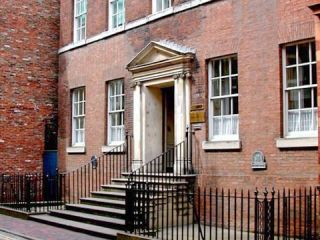 Maister House
A brick-built 18th-century merchant's house on High Street in Hull. The house is a living reminder of Hull's prosperity as a centre of shipping and commerce during the Georgian period. The building is currently used as offices, so only the grand plasterwork front hall and staircase can be viewed.
Maister's House was built in 1743 for Henry Maister, by architect Joseph Page after a previous house on the site had been damaged by fire. At the time it was typical of many merchant's houses of the period, but now it is one of the very few surviving houses from the mid-18th century. The highlight of the interior is the ornate stone staircase with iron balustrade.

Maister's House has probably the most architecturally significant interior in Hull, and, indeed, one of the finest 18th-century interiors in the country. The house was damaged by bombs in WWII, but has since been restored.

The exterior looks plain, in keeping with Palladian fashion, but the simple exterior hides an opulent interior. Over the stairs is a statue of the Roman god Ceres, and facing the statue is a memorial to philosopher John Locke.

More self catering near Maister House >>