HERITAGE HIGHLIGHTS:   One of the last surviving medieval turf mazes in Britain 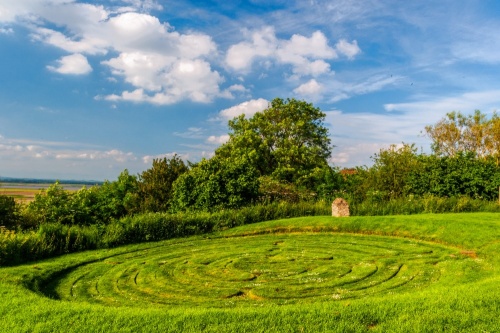 Julian's Bower is a turf maze cut into the hillside in a fabulous location overlooking the Humber estuary in the village of Alkborough, Lincolnshire. The maze overlooks the confluence of the Humber with the rivers Ouse and Trent. Below the maze stretch the Alkborough Flats, a wetland nature reserve that is home to a large bird population.

How Old is It?

The short answer is that we don't know. The first written record of a maze here comes from 1697 when the diarist and antiquarian Abraham de la Pryme speculated that it was of Roman origin. He was probably mistaken; the maze was most likely cut in the medieval period, possibly by Benedictine monks who maintained a cell at Alkborough until 1220.

Some historians have speculated that the medieval monks merely reshaped an existing Roman maze. The religious link is a distinct possibility, as there is a cobbled model of the labyrinth set into the floor of the church porch. 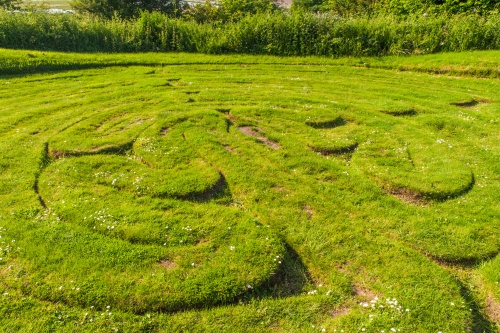 A closeup of the maze design

A local legend says that the maze dates to the 12th century and was carved as an act of penance by one of the four knights involved in the murder of Thomas Becket in Canterbury Cathedral.

But who was Julian?

The name might at first appear mysterious, but it seems that during the medieval period all mazes were generally referred to as Julian's Bower. One theory is that the name refers to Julius of Troy, the son of Aeneas, the central character in the Aeneid of Virgil. Julius is traditionally said to have introduced the concept of a maze into Rome after the fall of Troy. 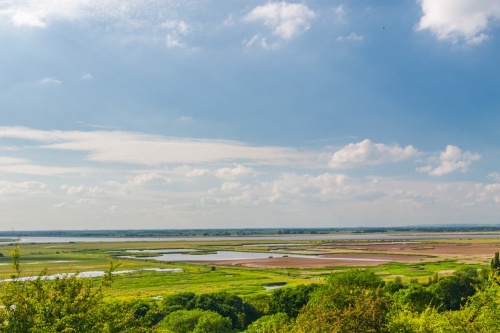 The view towards the Humber estuary

Ah, but there is another possibility! Abraham de la Pryme, writing in 1697, calls it Gillian's Bore (Bower). Gillian was a name used to apply to all women or girls, like we use the terms Jack and Jill, or John and Jane Doe to refer not to a specific person but to a generic idea of a man or woman. In this case, Gillian would be used to symbolise fertility. That makes sense, as mazes were often used in courtship rituals.

Pryme called the maze Gillian's Bore, and it has also been known as Gilling Bore. Pryme also refers to a second maze, which he called Troy's Walls. Traditionally, the city walls of Troy were said to be so intricate that the would bewilder an attacker. Anyone who got into the system of passages within the walls would be so confused they would never find their way out again. 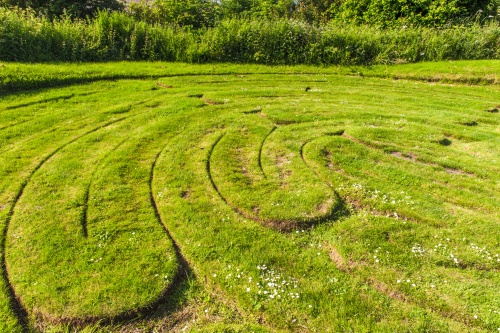 The turf is recut periodically to keep the design intact

A Place of Penance?

The maze is built to a traditional design of concentric, interlocking rings, similar to the design of the labyrinth at Chartres Cathedral, used as a spiritual tool by pilgrims, who would often travel the tortuous path on their knees as an act of piety, penitence, or meditation. It seems logical, then, to assume that it was used for religious purposes, but Pryme records that the maze was used for entertainment in Tudor times and was a popular focus for village games on the eve of May Day.

The maze is roughly 13.5m (44 feet) across and it has been estimated that if you carefully follow the path to the centre - known as Jerusalem - you will have travelled a quarter of a mile.

Though they were once common, very few turf mazes remain in England. In 2007 an English Heritage spokesman called the survival of Julian's Bower 'nothing short of miraculous'. Technically the maze is a labyrinth, as it has just one entrance and path. There is no possibility of getting lost as you might in a maze; you just follow the single path to the centre and then back out again.

Julian's Bower is extremely easy to find. It is signposted off Back Street, a block south of the church in Alkborough.

More self catering near Julian's Bower