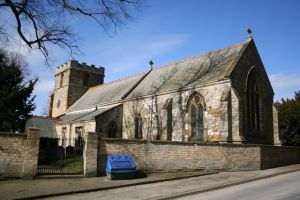 A small village near Barton upon Humber, Bigby was mentioned in the Domesday Book of 1086. The parish church of All Saints contains monuments to the Tyrwhitt and Skypwith families. Roman coins and Roman pavement have been found near the village.

Bigby's parish church dates to the 12th century, while the south aisle was added in the 14th century. The village had close ties with the Tyrwhit family over the centuries, and there are memorials to generations of Tyrwhits within the church. Perhaps the most interesting historic monument is that of Sir Robert Tyrwhit, who died in 1581. Look for the carving of a woodwose - a Lincolnshire wildman - at the feet of Sir Robert's effigy.

There is also the 13th-century effigy of an unknown woman and several memorial brasses. In the chancel is a triple-seat sedilia dating to the 13th century, and the octagonal font is 14th century, on a Victorian base.

Bigby is one of four Thankful Villages in Lincolnshire, so called because not a single soldier from the village was killed in WWI. A local legend suggests that an underground tunnel leads from the church to the nearby hamlet of Kettleby.

Why tunnel to Kettleby? Perhaps because Kettleby Hall was the seat of the Tyrwhit family. The Hall was originally a moated hunting lodge, but after the last Tyrwhite heir sold the estate to pay off his debts the manor was torn down.

On the road to Wrawby is Kettleby House, built in 1796, though a reused datestone shows a date of 1769.

On Bigby Hill, just south of the village, stands a striking monument erected in 1770 to mark 29 years of marriage between Edward and Anne Weston of Somerby Hall. The Grade II listed monument is made of ashlar and designed in Greek style, with an urn atop a slender Doric column. 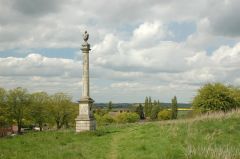 More self catering near Bigby >>

More bed and breakfasts near Bigby >>