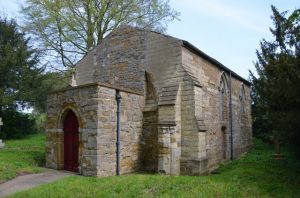 Clixby, All Hallows Church
All Hallows is a 13th-century church comprising only the chancel of a much larger medieval building. Entry is through a west door, through what was originally the chancel arch. The nave was pulled down in 1727.

The chancel was restored in 1889 when a small west porch was added. Entry is through a reset 13th-century doorway. Above the porch, you can make out the outline of the original chancel arch. Over the west gable is a small bell-cote.

The simple interior features a 14th century stone slab set into the floor in front of the altar. The incised carvings of a cross and chalice tell us that it commemorates a priest. The ceiling is painted with Latin inscriptions in praise of the Virgin Mary. There are old wooden pews and a very nice 15th-century font, all brought here from other redundant churches.

The font is octagonal, carved with saints on the stem and Biblical figures alternating with floral emblems on the bowl. It was brought to Clixby from St Peter's church in Low Toynton.

The interior is whitewashed, with two windows in the south wall and a large east window. A blocked priest's door is set into the south wall below a 14th-century window. Set into the wall is a piscina, and a sedilia stands in the sanctuary. On the chancel wall is a beautifully carved wooden tablet to Agnes Hutchinson (d. 1922), decorated with foliage.

In the churchyard is a 14th-century cross base, restored in 1889 by Hodgson Fowler, who added a crucifix to the top and set the cross on octagonal steps.

The village of Clixby is little more than a handful of houses and farm buildings, but in the medieval period there was a thriving village here.

All Hallows has been declared redundant and is only used for a few special ceremonies each year. It is cared for by the Churches Conservation Trust and is generally open to visitors.

More self catering near Clixby, All Hallows Church >>

More bed and breakfasts near Clixby, All Hallows Church >>