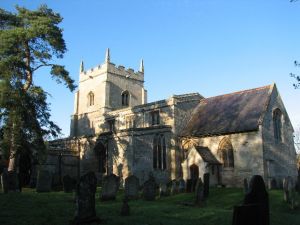 St Bartholomew's church, Ingoldsby
Ingoldsby is a small village 9 miles south of Grantham, Lincolnshire. Despite the name, the village is not associated with the Ingoldsby Legends, a collection of largely imaginary folk tales.

Ingoldsby's parish church dates to the 11th century and was recorded in the Domesday Book of 1086. Though the church was rebuilt in the Victorian period it retains features from the 11th to the 15th centuries, including a medieval window depicting the Coronation of the Virgin.

Aside from the church, there are 3 other listed buildings in the village. On Main Street is the Old Manor House, formerly the rectory and now a private dwelling. It was built in 1847 in Gothic style and stands 2 storeys high with a facade of 6 bays.

Also on Main Street is the Post Office, built in the 17th century with late 19th century additions. On Scotland Lane is Scotland House, erected around AD 1700 and altered in the mid-19th century.

Nearby is a prehistoric camp known as Round Hills, and five miles from Ingoldsby is the historic house of Grimsthorpe Castle.

More self catering near Ingoldsby >>

More bed and breakfasts near Ingoldsby >>