HERITAGE HIGHLIGHTS:   The mother church of the Gilbertine order 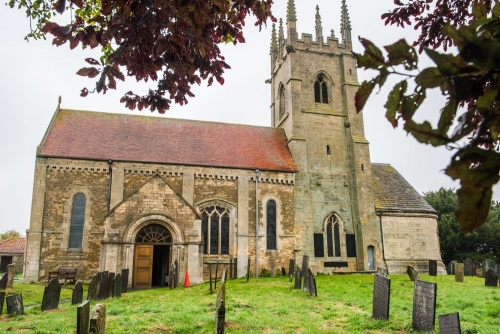 There was a Saxon church at Sempringham, in the marshy fens near Billingborough. Around 1100 Jocelin of Sempringham replaced that Saxon building with a new church dedicated to St Andrew. Jocelin had a son named Gilbert and it is this Gilbert of Sempringham whose name will forever be associated with the site.

According to the historical records, Gilbert was born with a 'repulsive physical deformity'. It is not clear what sort of deformity, but whatever it was, perhaps it influenced his outlook on life. Gilbert was trained as a clerk in France.

In those days that didn't mean a clerical position as it might today; a clerk was a minor cleric, though not necessarily in holy orders. He entered the household of the Bishop of Lincoln, and in 1129 was appointed Vicar of Sempringham and West Torrington by the Bishop.

In 1131 Gilbert built a simple range of buildings against the north wall of the church, with accommodation for seven local women, who vowed to live a life of charity, obedience, chastity, and humility.

This was the beginning of the Gilbertine Order, the only completely British monastic order during the Middle Ages. The original monastic buildings proved inadequate, and in 1139 Gilbert received a grant of land from Gilbert de Gant (Ghent) to erect a new priory about 350 yards away to the south west. 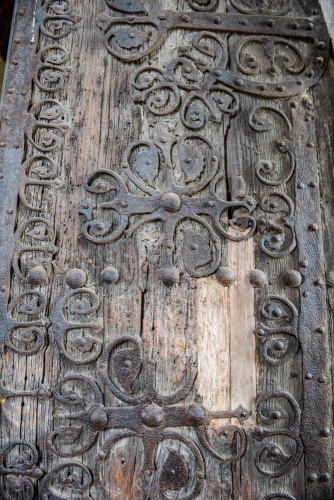 Sempringham Priory was a double house, with provision for both men and women (though the genders were segregated) and grew to provide a home for 200 nuns and 40 canons. The canons served as priests and observed a mix of Augustinian and Premonstratensian rules.

The order was known for a strict interpretation of those rules, so strict in fact that in 1170 the lay brothers serving at Sempringham rebelled and appealed to the Pope to relax the harshness of priory life.

Gilbert became friends with Henry II and the Gilbertine Order were granted royal protection. Henry might well have regretted his decision when the Gilbertines were accused of siding with Thomas Becket and helping the archbishop to escape to France during his squabble with Henry over church rights.

By the time Gilbert died in 1189 there were 13 Gilbertine priories scattered around England. This number eventually rose to 25 by the time of the Reformation. In 1202 Gilbert was canonised as St Gilbert. His body was exhumed from its place between the altars in the priory church, encased in a lead coffin, and reburied, but the site of the grave has been lost.

When Edward I defeated Prince Llewellyn of Wales in 1283, he captured the prince's 17-month-old daughter and heir Gwenllian. Edward could not bring himself to murder the child but feared her presence as a focus for Welsh rebellion, so he asked the Prior of Sempringham to admit Gwenllian to the priory.

In 1327 his grandson Edward III visited the priory and provided an annual stipend of 20 pounds to pay for her keep. The princess was not a nun, and not in holy orders, she was a prisoner, unable to leave the Priory.

Gwenllian lived out her days at Sempringham and died in 1337. A memorial made of Welsh slate to the 'last princess of Wales' stands on the path to St Andrews church, and is a frequent destination for Welsh pilgrims. 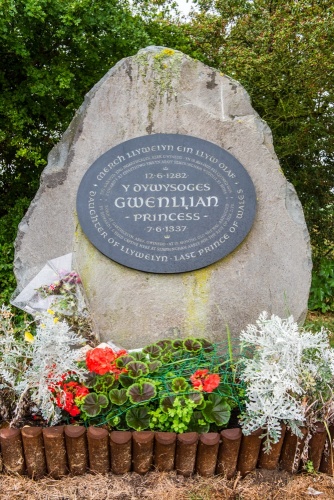 In 1284 Edward also sent the 7 daughters of Llewellyn's brother David to Sempringham. Despite this royal favour the church at Sempringham Priory fell into disrepair and Pope Nicholas IV had to promote the priory as a destination for pilgrims in order to raise money for its repair. The Pope's efforts must have helped, for around 1310 a new, larger church was built.

Sempringham Priory survived until 1538 when it was dissolved by Henry VIII. One of the displaced canons later returned and carved the phrase 'Sing praises unto the Lord' into the wall of the tower, along with a gauntlet. Historians speculate that he was symbolically 'throwing down the gauntlet' as a challenge to the king and his policy of suppressing the monasteries.

The estate was purchased by the Clinton family, the monastic buildings pulled down, and a large Tudor house erected. This grand house eventually fell into decay and it too has disappeared, leaving only earthworks. So the only tangible reminders of the important priory and the Gilbertines are the parish church where the priory had its roots, a holy well, and the memorial to Gwenllian.

A very short distance to the south of the church is a circular stone basin, reached by a set of descending steps, where a spring, or well rises from the ground. The well is said to be associated with St Gilbert and the water is traditionally thought to have healing qualities. 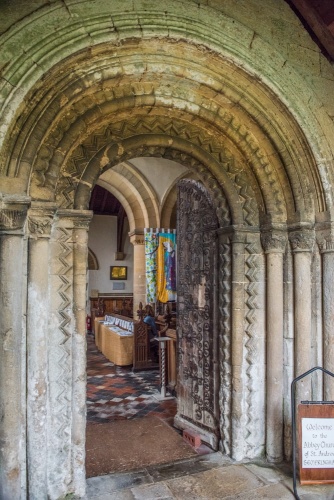 The original 12th-century church at Sempringham was much larger than the still sizeable building we see today. By 1788 the church was in a serious state of disrepair, so the chancel and transept were pulled down, leaving the 14th-century tower now unusually at the east end of the church, with a rounded Victorian apse beyond.

There is a Norman doorway, protected by a 19th-century porch built to mark Queen Victoria's Diamond Jubilee. On the exterior south wall of the tower is a memorial to St Gilbert, with markers depicting the layout of the medieval village, church, well, Priory and fishponds. In the porch is an 11th-century grave cover found in the churchyard.

One of the most extraordinary historical features is the 12th-century doorway. The door itself is 13th-century timber and is supported by an exceptionally elaborate system of iron strapwork and two medieval hinges. The intricate design is like lace in iron. 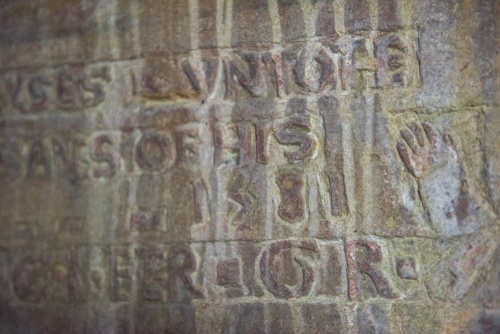 Most of the pews are Victorian but there are medieval bench ends at the west end of the church. Each bench end is different and the benches retain their holes for supporting candle brackets.

Look for the traces of red ochre paint on the underside of one of the arcade arches separating the nave and aisle.

The north aisle was rebuilt in 1788 and during the building preparations, the foundations of St Gilbert's original school were found.

By the tower is a stone coffin found on the Priory site along with a parish pier. Six bells hang in the tower. The oldest was cast in 1412, making it among the oldest bells in Lincolnshire. 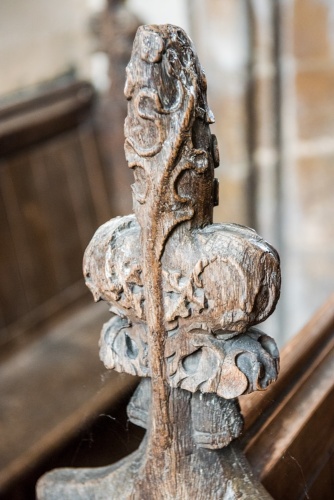 Another historical highlight is an ancient oak parish chest bound with iron with 3 locks. The priest had one key and the churchwardens had the other 2, so the chest could only be opened when all 3 were present.

The octagonal font is only decorated on 7 sides, suggesting that it was made to stand against a wall, where the 8th side would not be seen.

In the northwest corner of the churchyard is a small medieval tithe barn.

The church is open for irregular services and is often opened on specific afternoons during the summer months. We arrived for one of these afternoon open times on a miserably wet, windy summer day. The church was manned by two volunteers, who had been so certain that no one would come to visit on such a dreadful day that they were sitting in their car chatting and hadn't bothered to open the church.

Thankfully, when they realised we had made a special trip to see the church they were only too happy to open it up and give us a guided tour of the historical highlights. They then left us to explore on our own but stayed around to answer questions.

Visiting the church is an extraordinary experience, even on such a miserable day. The sense of history is palpable, and the church is full of interest. 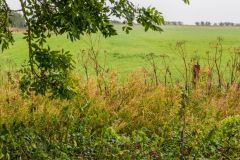 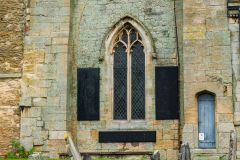 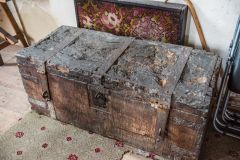 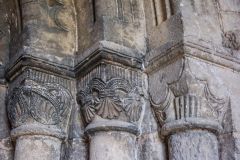 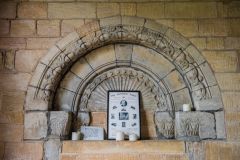 More self catering near Sempringham

More bed and breakfasts near Sempringham