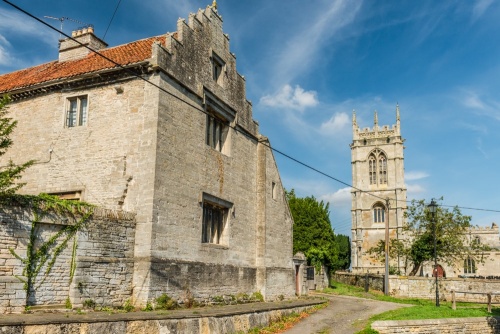 Ellys Manor and the medieval parish church
Ellys Manor is a late medieval manor house built by a successful wool merchant. The highlight of Ellys Manor is the series of early Tudor wall paintings, which are reckoned to be among the finest and most complete in England. Sir Niklaus Pevsner, who might be said to know a thing or two about English historic architecture, said of Ellys Manor House, 'The building and paintings are of outstanding historical interest', and called the manor a 'must-see'.

The house was built sometime in the late 15th or early 16th century, with stepped gable ends over an otherwise plain stone exterior. The Ellys family were wealthy wool merchants, trading English wool with the lucrative markets in Flanders.

The influence of their Flemish connection is born out in the design of Ellys Manor House, which looks like a northern European house transported magically to an idyllic location in the English countryside. The interiors feature high ceilings, supported by massive oaken beams.

The upper rooms are the showpiece of the manor, for it is here that you will find the series of early 16th-century wall paintings considered among the most complete and historically significant domestic decorative art in England from this period. 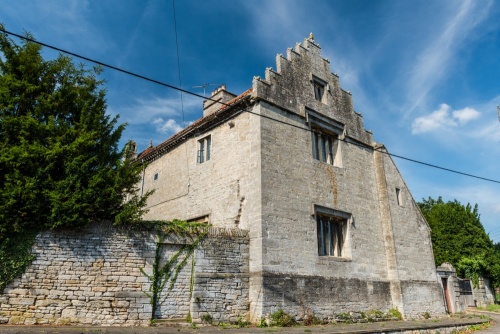 Another look at the manor exterior

The wall paintings date from around 1500 and are painted in imitation of French verdure tapestries, a very rare and unusual style for an English house at that time, and once again emphasizing the Ellys' connection with Europe.

The house stands in two acres of attractive gardens. Opening hours are regularly daily from spring through autumn, but as Ellys Manor is a private home it is best to telephone first to ensure opening times.

UPDATE:
We've received word that Ellys Manor is closed to the public due to a dispute between the owners on one side and English Heritage and the Planning & Conservation authorities on the other. You can read more about this dispute and an associated petition on the Ellys Manor Website. We will update this page as more information becomes available. In the meantime, it would a good idea to avoid planning a visit.