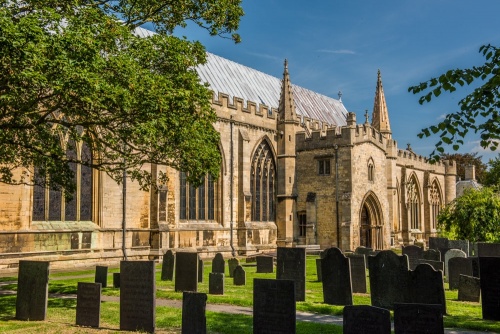 In his popular book, 'England's Thousand Best Churches' author Simon Jenkins awarded St Wulfram's Church in Grantham, Lincolnshire a five-star rating, marking it as it one of the very best historical churches in the country.

It is easy to see why Jenkins was so impressed when you visit this delightful historical building. The glory of St Wulfram's is the soaring spire that rises 283 feet above the ground. It was the tallest spire in the country at the time it was built.

The earliest church on this site was built in the early Saxon period and a church was recorded in the Domesday Book of 1086. You can still see Saxon herringbone stonework near the organ.

The Saxon church was rebuilt in the Norman period and again in following a fire in 1222 to give us the core of the building we see today. It is constructed of limestone quarried at Ancaster. 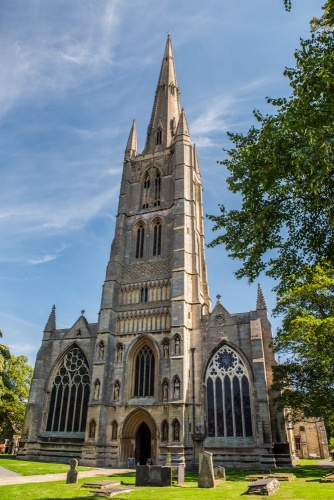 The west front and tower

The medieval church was built with money given by wealthy wool merchants, who poured their profits into making their parish church the best that money could buy.

The church was restored in the 1860s under the direction of Sir George Gilbert Scott. Unfortunately, many of the original medieval church furnishings were removed at this time and sold. Most of the stained glass is Victorian, with windows by such famous makers as Clayton & Bell and CE Kempe.

The church dedication is a curious one; there is only one other church in England dedicated to St Wulfram (the other is in Sussex and for some reason misspelt as St Wulfran). Wulfram was born in France around AD 650 and rose through the Church to become Archbishop of Sens. After his death in AD 720 miracles were attributed to his intervention and he was canonised.

During the medieval period, a shrine to St Wulfram was erected inside the church crypt (though it was later moved to a chamber over the north porch), with a reliquary containing the saint's arm bone. The shrine made Grantham's parish church a popular destination for pilgrims. 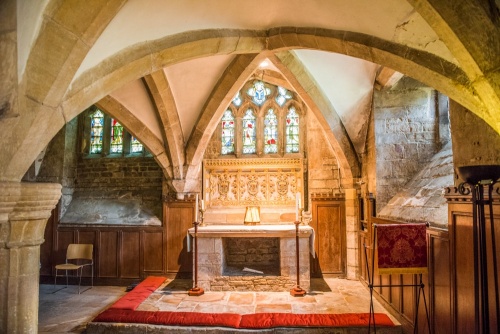 In 1627 the Vicar of South Grantham, Peter Titley, decided to move the communion table from the body of the church to the east end of the chancel. This seemingly innocuous step created enormous friction between traditionalists and staunch Puritans. Titley took the move without consulting the Alderman Thomas Wicliffe, who ordered his men to return the table to its original location.

Titley reacted by saying that if the communion table was moved he would build a new altar in stone which could not be moved. Both parties appealed to Bishop Williams of Lincoln, who declared that the table should stand east-west in the chancel, not 'altarwise' at the east end.

The church suffered during the Civil War when Oliver Cromwell's soldiers stabled their horses in the church. They stripped wooden furnishings from the building for fuel, though, thankfully, they left the chained library undisturbed.

If you approach the church from the west you can't help but be impressed by the Early English west front, built in the 13th century. There are a dozen statue niches in the west facade, though the present statues are modern. Take some time to walk around the church exterior and you will spot numerous grotesque carvings peering down at you.

Some depict mythical beasts, others show human faces with bizarre expressions. One humorous carving shows a man covering his neighbour's mouth with his hand, while another caving shows a traditional Green Man, a wild man of the woods with vines flowing from his mouth. 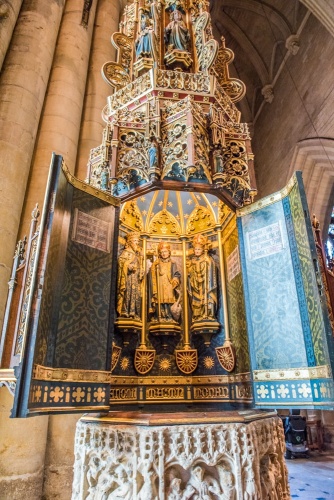 One of the interior highlights is a superb 1496 octagonal font, decorated with intricate carving on the bowl, shaft and base. The font is topped by a richly carved cover designed by Sir Walter Tapper in 1899. Inside the cover are painted panels depicting St Wulfram, St Hugh of Lincoln and Edward the Confessor.

Perhaps the greatest historical treasure inside St Wulfram's is a chained library established in 1598 by Rev Francis Trigge, the rector of Welbourn. Books in the medieval period were so valuable and rare that they were often chained to their shelves to prevent theft. Rev Trigg gave Â£100 to buy books for the library, and among the volumes purchased with his gift is a book of law printed in Venice in 1472 (4 years before William Caxton set up the first printing press in England). There are still over 80 chained books in the Trigge Library.

St Wulfram's has three medieval chapels. The oldest is the Lady Chapel, built in 1350 and featuring outstanding window tracery. Look for the carved head of a hippopotamus among the carvings.

Beneath the Lady Chapel is the Crypt Chapel, also built around 1350. This is where the reliquary containing St Wulfram's arm bone was held (though it was on occasion kept in the chamber over the north porch). The crypt door and ironwork are original. 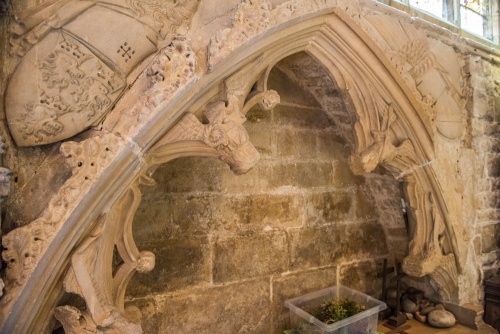 Around 1450 the Corpus Christi Chapel was added, with large Perpendicular Gothic windows flooding the interior with light.

The church is full of interesting historical memorials. The oldest is the tomb of Richard de Salteby and his wife, dated to 1362. Another medieval tomb is that of John Harrington (d. 1403), a major benefactor of the church. In the north aisle is a richly carved tomb commemorating Francis Malham, a Royalist leader in the Civil War who died at Grantham in 1660.

One of the largest and most impressive monuments is to Lord Chief Justice Sir Dudley Ryder, who died in 1756. Against the north wall is a memorial to William Cust, a naval commander during the Anglo-Spanish War. 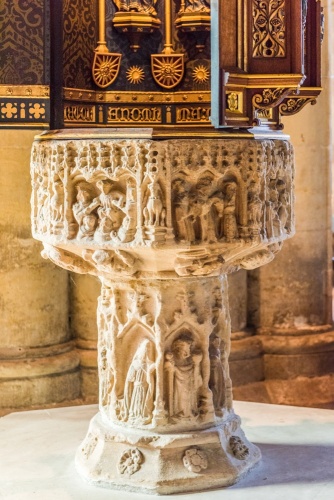 According to legend, there is a secret tunnel between St Wulfram's Church and the Blue Pig Pub on Vine Street.

Immediately east of the churchyard is Grantham House, a lovely townhouse dating to around 1380 and now in the care of the National Trust. To the north of the churchyard is the original home of The King's School, founded in 1329. The most famous student at The King's school was Sir Isaac Newton and another was William Cecil, the first Lord Burghley.

St Wulfram's is very easy to reach from central Grantham if you are on foot. It is a bit more problematic if you arrive by car, as there is no dedicated parking area. You can often find parking along the nearby streets but most parking bays have restricted time limits, so do be careful. 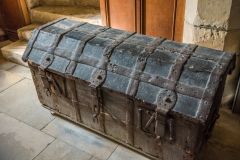 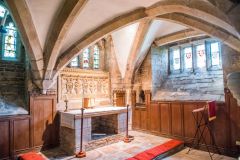 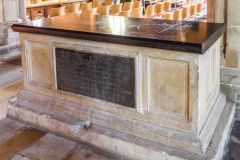 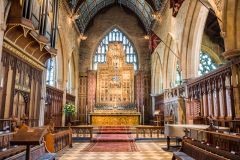 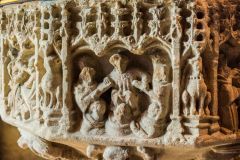