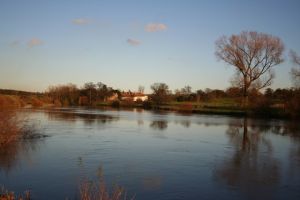 Knaith Hall and the River Trent

Knaith is a small village in the West Lindsey district, notable as the birthplace of Thomas Sutton (b. 1532), founder of Charterhouse School and Hospital in London. Sutton was Master of the Ordnance in the North. He made his fortune from coal mines near Newcastle, and became one of the largest moneylenders in Elizabethan England.

The village was recorded in the Domesday Book of 1086 when the manor was owned by Stow Abbey and tenanted by the Bishop of Lincoln. You can still see earthwork remains of the medieval village of Knaith, including a deer park laid out in the 13th century.

The red-brick hall beside the River Trent dates to the 15th century, with Regency Gothick additions, and incorporates parts of a medieval nunnery. Near the Hall are remains of a 16th-century garden and an 18th-century deer park. From 1553 the Hall was the principal residence of the Willoughby family.

In the 17th century, the Hall passed to the Earls of Abingdon, then to Richard Dalton, who rebuilt the house in its current style. In the Victorian period, the Hall gained black and white half-timbering, perhaps drawing inspiration from nearby Gainsborough Old Hall.

The parish church of Knaith dates to the 11th century, with major rebuilding in the 14th and 18th centuries. In 1630 it was reduced in size and turned into a private chapel for the owners of Knaith Hall, who incorporated the church into a landscape garden design. All that remains now is the nave of the medieval church, with a twin-gabled roof.

The west wall is 11th century, with traditional late Saxon There are a Jacobean pulpit and tester, with 17th century carved benches. Memorials include a grave slab to William, son of Lord Darcy (d. 1408) and another to an unknown woman who died in 1440.herringbone masonry. Look for the 14th-century font, carved with a frieze of peculiar heads.

The origins of the church are unclear, and it was for many years thought to be the nave or transept of Heynings Priory, a nunnery founded by the Cistercian order around AD 1150. The priory has now been shown to be built at Park Farm South, not at the church site beside the Hall. Heynings Priory was established by Rayner de Evermue.

Unfortunately, De Evermue died before the Priory was finished, leaving the nuns short of funds. The Priory was dissolved by Henry VIII in 1539, at which time it supported a Prioress and 11 nuns. After the Dissolution, the Priory passed to the Heneage family and then in 1553 it passed by marriage to Lord Willoughby of Parham.

Just two miles away is Gainsborough, with its Old Hall, a medieval manor house, and three miles away is Stow Minster, a lovely old Saxon church. 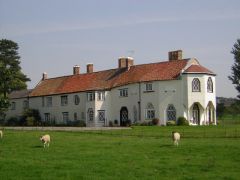 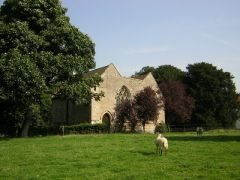 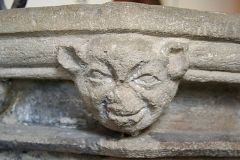 More self catering near Knaith >>

More bed and breakfasts near Knaith >>